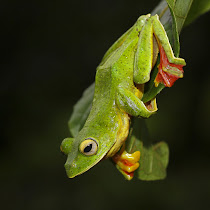 Conservation photography is a blend of (1) the art of wildlife photography and (2) the science of natural history documentary photography. Conservation photography can work as a tool for the non scientist and non biologist community to contribute enormously for building up a rich database and create a huge wave of conservation awareness among common man. Life happened on earth 3.5 billion years back and human life came in much later. In spite of scientific progress, about 70% of species still remain undiscovered and nameless. We have discovered about 1.7 million species on land and in water. So what remains undiscovered is a huge portion of our biodiversity. Against the background of still unknown richness of biodiversity, this century has witnessed rapid extinctions of species. Millions of species are disappearing directly as a result of human destruction of natural habitats. “India’s Most Wanted” is an offshoot of DCP’s earnest venture to popularize conservation photography and to support the scientific community by helping in building up a rich database of various life forms on earth. This project is now live !!! DCP is inviting all photographers across India to contribute their best images of the most endangered species of the country to this platform thus building up a rich resource of data and images, which can be extremely helpful for the scientific community.