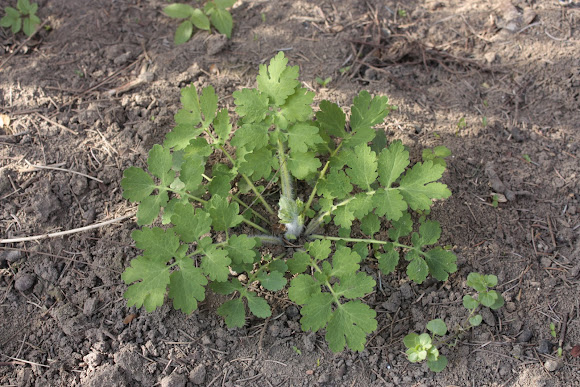 Greater celandine has an erect habit, and reaches 30 to 120 cm high. The leaves are lobed and wavy-edged (crenate), 30 cm long. The flowers consist of four yellow petals, each about 1 cm long, with two sepals. A double-flowered variety occurs naturally. The flowers appear from late spring to summer.

This herb has been recognized as a useful detoxifying agent. The root has been chewed to relieve toothache. It was formerly used by gypsies as a foot refresher; modern herbalists use its purgative properties. Juliette de Bairacli Levy, the Jewish-English herbalist, recommended greater celandine for the eyes, diluted with milk, and the sap to be used for getting rid of warts. Chelidonium was a favourite herb of the French herbalist Maurice Messugue, and in homeopathy the mother tincture, or low potencies, is regarded as a detoxifier of the liver. C. majus has traditionally been used for treatment of various inflammatory diseases including atopic dermatitis. It is also traditionally used in the treatment of gallstones and dyspepsia.