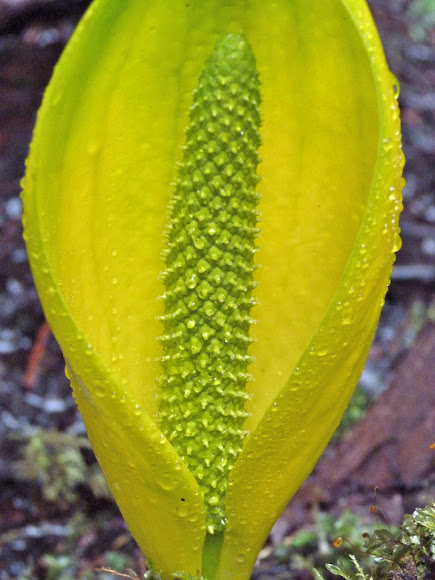 Western Skunk Cabbage also called Yellow Skunk Cabbage or Swamp Lantern, is a plant found in swamps and wet woods, along streams and in other wet areas of the Pacific Northwest, where it is one of the few native species in the arum family. The plant is called Skunk Cabbage because of the distinctive "skunky" odor that it emits. This odor will permeate the area where the plant grows, and can be detected even in old, dried specimens. The distinctive odor attracts its pollinators, scavenging flies and beetles. Although similarly named and with a similar smell, the plant is easy to distinguish from the Eastern Skunk Cabbage (Symplocarpus foetidus), another species in the arum family found in eastern North America.

Emma, does it produce berries?

this flower is definitely pollinated.Looks so much like an anthurium

Thanks for the ID Cindy!