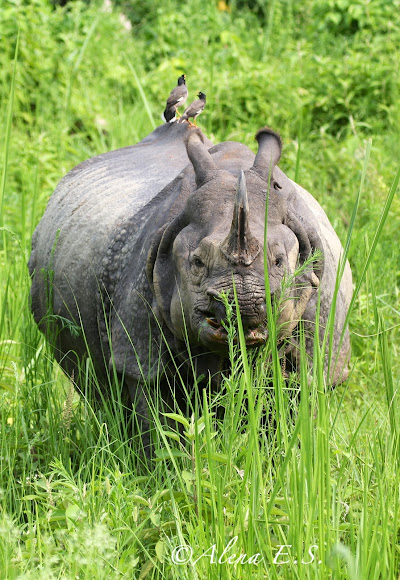 This rhino was seen snacking on grasses in the low-lying jungles of Nepal. The birds on its back are myna birds, who eat insects and grubs out of the rhino's ears and nose (and hitch a ride!).

There are no good words to describe what it is like to be looked in the eyes by a rhino. There is something about a rhino's powerful gaze that stops you in your tracks. These animals are so big, so strong, so fierce, and so beautiful, yet are in so much danger because of us. Rhinos worldwide are in great peril from poaching. Rhino horn is much sought-after in many parts of the globe as a medicine against fever and other disorders. However, rhino horn is made of keratin, the same substance as our fingernails, and has no proven medical merit. Even if it did, it would be no excuse to wipe out an entire group of species. Learn more about rhinos and what you can do to help them at http://www.savetherhino.org/ . See more of my photography at https://www.facebook.com/alenasphotograp...