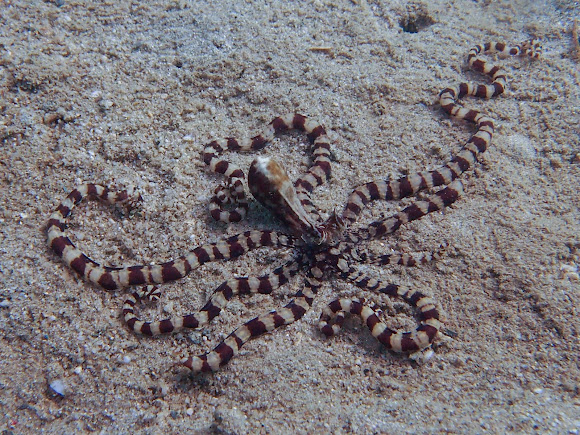 As if a testament to this animals extraordinary camouflage and mimic abilities, it was only discovered in 1998. It mimics the physical likeness and movements of more than 15 different species, including sea snakes, lionfish, flatfish, brittle stars, giant crabs, sea shells, stingrays, flounders, jellyfish, sea anemones, and mantis shrimp by contorting its body and arms, and changing colour. Even more incredible, the mimic may decide which animal to impersonate depending on local predators. For example, when the octopus was being attacked by damselfish, the octopus was observed to appear as a banded sea snake, a damselfish predator. The octopus impersonates the snake by turning black and yellow, burying six of its arms, and waving its other two arms in opposite directions.

Easily confused with the Wonderpus (Wunderpus photogenicus), the Mimic is easily distinguished by a consistent white line bordering it's arms.

Wow, I'm honoured. Thank you all! It was definitely a highlight of my year!

Congrats again Sam! This incredible mimic has been chosen as a runner up in the Best of 2012 Other category.

Congratulations Sam, this spotting is featured in the Project Noah blog today! http://blog.projectnoah.org/post/3039027...

Sam, what a cool spotting!

Congratulations on a great photo series and video. Wonderful!

very cool. the coloration in your photo reminds me of the sea snakes in Borneo.

Congrats and what an awesome spotting!

Thanks all - especially Yasser! Feel honoured.