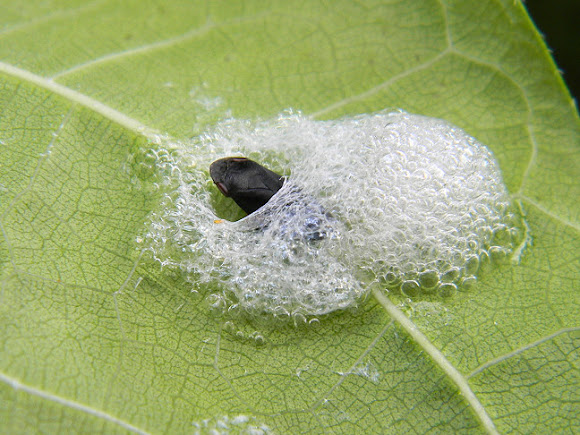 This is a froghopper in spittle. A "spittlebug" is another name for an immature froghopper. From the superfamily Cercopoidea, a group of Hemipteran insects. These families are best known for the nymph stage, which produces a cover of frothed-up plant sap resembling spit; the nymphs are therefore commonly known as spittlebugs, or spit bugs, and their froth as cuckoo spit, frog spit or snake spit. The froth serves a number of purposes. It hides the nymph from the view of predators and parasites, it insulates against heat and cold, thus providing thermal control and also moisture control. Without the froth the bug would quickly dry up. The nymphs pierce plants and suck sap causing damage, and much of the excess filtered fluids go into the production of the froth, which has an acrid taste, deterring predators. A few species are serious agricultural pests. Source: http://en.wikipedia.org/wiki/Froghopper

Spotted on a leaf in a large semi-urban yard & garden situated next to a disturbed patch of remnant forest.

From the above description it seems this specimen is quite mature as compared to what would normally be encountered in spittle.

Hello Cameron. Thanks for your suggestion but it is not necessary to suggest a name for a spotting that already uses the name you suggest. Cheers