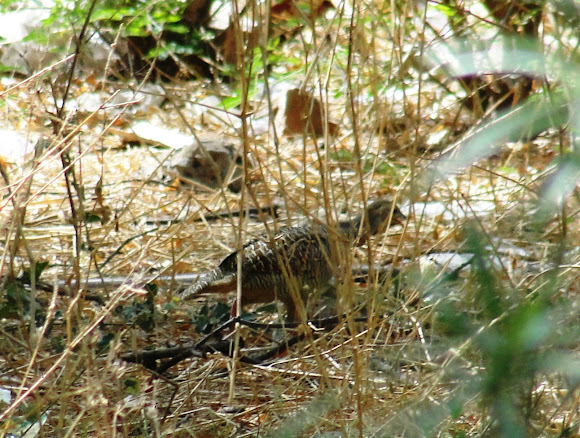 The francolin is barred throughout and the face is pale with a thin black border to the pale throat. The only similar species is the Painted Francolin, which has a rufous vent. The male can have up to two spurs on the legs while females usually lack them. Subspecies mecranensis is palest and found in arid north-western India, Eastern Pakistan and further west in Southern Iran. Subspecies interpositus is darker and intermediate found in northern India. The nominate race in the southern peninsula of India has populations with a darker rufous throat, supercilium and is richer brown. They are weak fliers and fly short distances, escaping into undergrowth. In flight it shows a chestnut tail and dark primaries. The race in Sri Lanka is sometimes given the name ceylonensis or considered as belonging to the nominate

The Grey Francolin is normally found foraging on bare or low grass covered ground in scrub and open country, and is rarely found above an altitude of 500 m above sea level in India, and 1200 m in Pakistan. The distribution is south of the foothills of the Himalayas westwards to the Indus valley and eastwards to Bengal. It is also found in north-western Sri Lanka. Introduced populations are found in the Andaman and Chagos Islands. They have been introduced to Nevada in the United States of America and Hawaii, along with several other species of francolin.

Status They are hunted in much of their range using low nets and easily caught using calling decoy birds.

Glad to help. Nice spot and wonderful photos. Thanks for posting.

Thanks for ID Birding For Fun