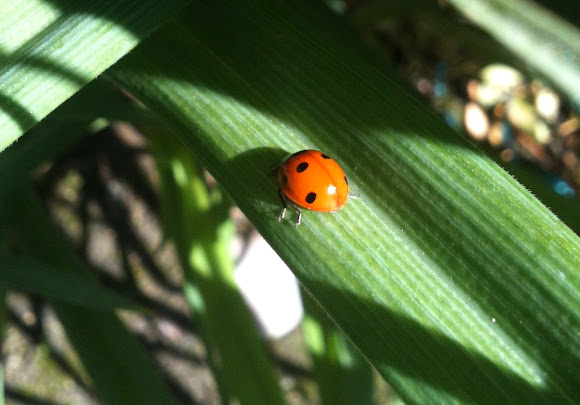 The seven-spotted ladybug is native to parts of western Europe, and has been introduced into much of North America. The adult seven-spotted lady beetle is relatively large (7-8 mm). The body is oval and dome-shaped, and it has a white or pale spot on either side of the head. The black spot pattern on the body is usually 1-4-2, with either red or orange forewings. Lady beetle larva can grow up to 7-8 mm in length and are dark with three pairs of prominent legs. Eggs are about 1 mm long and are small and spindle shaped. Many different species of ladybugs, including the seven-spotted ladybug, have been brought to North America to be used in biological control of pests. The problem is that some of the imported ladybugs are competing with the local ladybugs for food and habitat, and have displaced the natives in many areas. This can reduce ladybug biodiversity and and my damage local ecosystems

The seven-spotted ladybug lives in a wide variety of habitats. Any place where there are plants and aphids may attract this species.

Certain species of ladybugs, including this one, were dedicated to the Virgin Mary during the Middle Ages, called "beetles of Our Lady." As time progressed, this name got shortened to ladybird beetles, ladybirds, or ladybugs. Ladybugs are more properly known as lady beetles, because "bug" applies most accurately only to insects in the order Hemiptera.