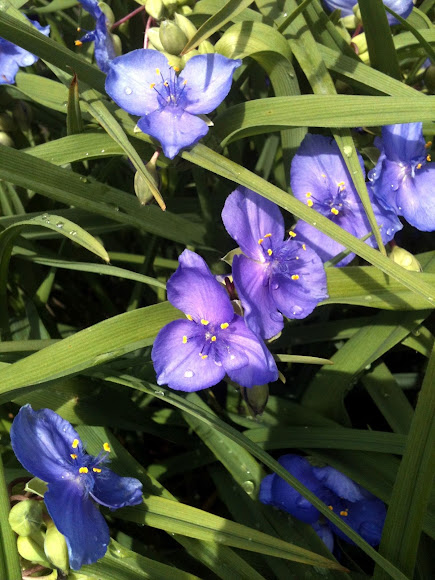 Spiderwort flowers have a very short life - only a single morning - but each plant will produce 20 or more flowers per stem. The petals quickly decompose after blooming. Spiderworts are weak-stemmed plants that grow up to 1 foot long. They produce a watery juice and have folded, straplike leaves. The 3-petaled flowers, opening at dawn and fading by mid-afternoon, are surrounded by many buds. Spiderwort is easy to care for and adjusts to a variety of soil conditions. It is a North American native plant named for John Tradescant senior (he died in 1638) a famous English gardener who received the species from Virginia sometime before 1629. There is also the possibility that it was named after his son, John Tradescant junior, who was himself a notable gardener and who visited Virginia in the 1650's. Both men were head gardeners to King Charles I of England and both were very serious plant collectors, traveling around the world in search of new plants for the King's garden.

Break the tip off a spiderwort leaf and wait for a drop of sap to appear, then touch it with your fingertip and notice how far you can stretch a thread of sap. This resemblance to a spider's silk may explain where its name came from. The gooey quality of the sap definitely explains its familiar nickname of "cow slobber"! While you are up close, look at the lo-ong purple hairs on the stamens! The cells of the stamen hairs of some Tradescantia are colored blue, but when exposed to sources of ionizing radiation such as gamma rays, the cells mutate and change color to pink; they are one of the few tissues known to serve as an effective bioassay for ambient radiation levels ***** All species of the Spiderwort are considered edible. The most common use is to mix the young leaves into a salad. These same leaves can be cooked for a mere ten minutes to offer a potherb that can be enjoyed with a meal. The flowers (which may be either pink, blue or rose-purple) make an attractive edible garnish for salads or cakes. With a little more work the flower heads can be candied by slightly brushing them with whipped egg whites and sprinkling in sugar. It is good to dip them in water and allowed to dry prior to adding the egg white and sugar. Medicinally the leaves can be made into a poultice and used to treat insect bites and sores on the skin. The roots are considered a laxative and a tea of the root has been used for stomach aches. ******