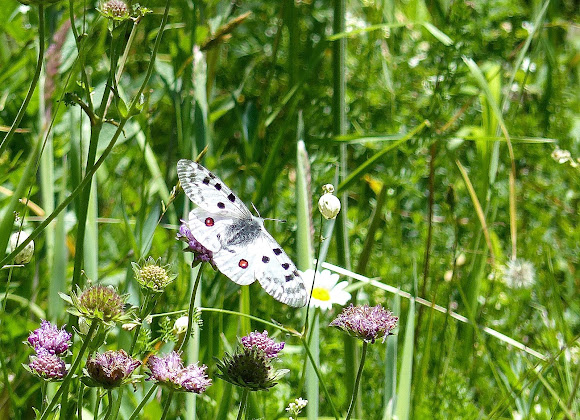 The Apollo butterfly is a beautiful white butterfly, decorated with large black "eye" spots on the forewings and red eye-spots on the hindwings.These striking red eye-spots can vary in size and form depending on the location of the Apollo butterfly, and the bright red colour often fades in the sun, causing the eye-spots of older individuals to appear more orange. The wings are shiny, with slightly transparent edges,and some individuals are darker (melanistic); a general phenomenon common in many butterflies. The caterpillars of this species are velvety black with orange-red spots along the sides.As well as being a great deal of individual variation in the appearance of the Apollo butterfly, a number of subspecies have also been described.

Spotted during the ascent of the Puy de Dome in France.

Thanks for your encouragement!