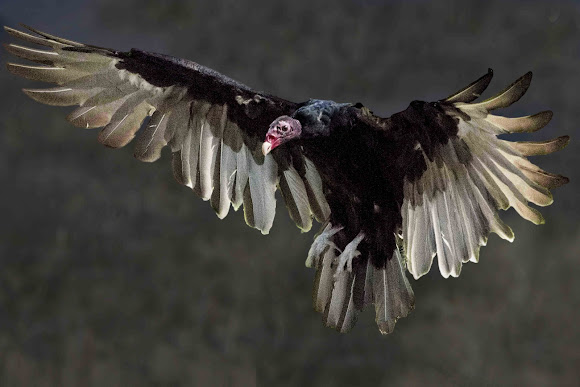 A large raptor, which in some ways resembles a turkey. It is seen as black from a distance, but closer inspection reveals brown in the feather outer tips. The head is red, no feathers, with a wrinkled neck…as pictured.

This vulture was spotted in the southern part of Everglades National Park in Florida. The area is swamp with grass reeds, spotted with trees. According to references I consulted, this is the most widespread vulture in the US. It can be found in a variety of habitats in all states in the continental US.

This scavenger is well known for its dietary habits. It is not known for attacking living prey. They are most easily found at carcasses along or on the road…as well as soaring with its wings spread, riding thermals in the sky. It has the ability to find carcasses not just by sight, but also by smell. They do not build nests, as is traditional with most birds. They will arrange scraps of vegetation or wood in crevices of cliffs, ledges, or scrape out an area in the soil or vegetation litter.

Congratulations Jim! Thank you for the information and for sharing :)

Thanks Fekix, Pradeep, Michael and Triggs...I am in good company with you guys!

Thanks Ashley, I much appreciate the recognition!

Congrats Jim, this awesome series of a Turkey Vulture has been selected as Spotting of the Week!

Ashley, thanks for the nomination.

Thanks...in my research on vultures, another observation was that these birds keep themselves clean, in spite of their diet. That is easier to accomplish with a featherless head.

Actually Pollila,these are very gentle creatures and their wingspan is wow!

That first pic is awesome!