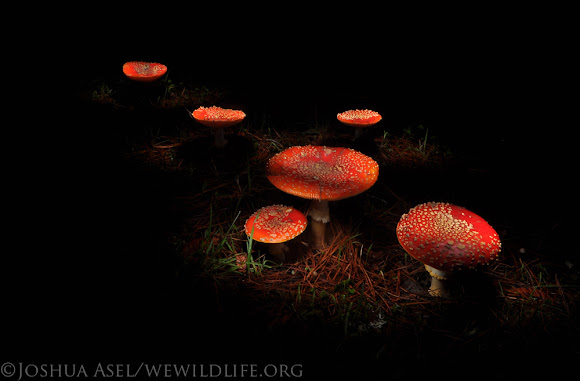 The most well known type of fly agaric, the toadstool (shown here), is considered a poisonous mushroom. Although deaths from the fly agaric rarely occur, certain cultures will boil them, removing the toxins, and then eat them as a delicacy. They also hold psychoactive properties, most used and revered religiously by Siberian peoples.

Symbiont of deciduous and coniferous trees. Most associated with the Norther Hemisphere, they were accidentally introduced into the Southern Hemisphere as well.

These photos are not photoshopped. All photos ©Joshua Asel

Thank you very much everyone! Viv, no pixies this time around but I did see them. They're just camera shy.

Congratulations on the SOTD Joshua. A lovely series of images .. No pixies?

It says their habitat is conifer and deciduous forests worldwide, not a tree in sight around here haha. Hopefully next year when I move out east :)

Thank you Reza and Ashley! Ashley I'm surprised you don't have any around there.

Congrats Joshua, very cool! Would love to see this fungus, glowing or not :)

Sweet thanks so much Yasser and team. The next share will be a sea tidal creature which with no eyes ;)

Josh, this magical mushroom series has been chosen as Spotting of the Day! Congrats on another well-deserved selection and we can't wait to see what you share with us next. Keep up the great photography work!

Thank you very much Antonio and Christos!

Thank you very much Oneng.