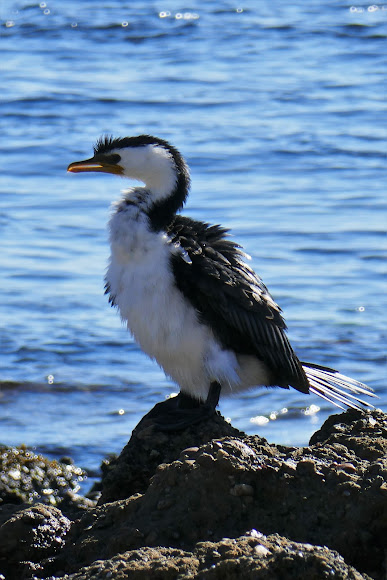 The little pied cormorant, aka little shag, is a common Australasian waterbird found in most aquatic environments, and is a member of the Phalacrocoracidae family. It is a small cormorant that grows to around 55-60 centimetres. It's a benthic and solitary feeder that will dive for up to 20 seconds for prey. It feeds on crustaceans, fish, eels and insect larvae. During the breeding season, a platform nest of sticks lined with leaves is built close to other water birds, where 3-5 pale blue eggs are laid. It needs some trees and bushes near or over water for nesting. There are three subspecies.

Cormorants live near bodies of water such as swamps, lakes, lagoons, estuaries and coastal shores. This bird was sunning itself on the rocks at Norah Head, on the NSW Central Coast. The 3rd photo is a very common pose that many people would recognise.

This beautiful bird is in breeding plumage - the head feathers are longer and form a short, erectile crest on the forecrown. The nape also appears shaggier than usual.