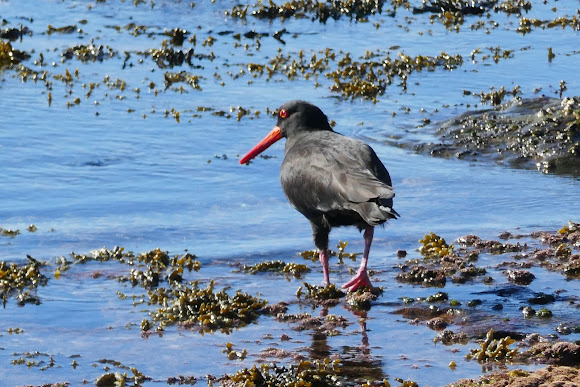 This is my 1000th spotting on Project Noah. I was hoping for something unusual to come my way that I could share, and that's when I spotted a pair of very distinctive birds feeding on a rock platform. At first I thought this was a pair of crows, mostly because of size and colour, and that peaked my interest because I had never seen crows by the seashore like this. It wasn't until I moved closer that I realised this was something totally different, and it was to be my first encounter with the sooty oystercatcher. This is quite a large bird, and is the only all-black shorebird in Australia. It has a long red bill, red eye and eye ring, and pink legs. It feeds on molluscs, crabs and other crustaceans, marine worms, starfish and sea urchins, and small fish. In fact, anything that's in abundance. This species is endemic to Australia, and is declared as Secure in most states, but is listed as Vulnerable in NSW, and Near Threatened in Victoria.

Spotted foraging in the rock pools on a rock platform at Norah Head, on the NSW Central Coast. They almost always forage in the intertidal zone, for the two hours either side of low tide. This was also a very calm and sunny day, and the ocean was particularly smooth with little swell. The rock pools contained vast colonies of an algae known as Neptune's necklace (Hormosira banksii), and there would be all sorts of goodies hiding amongst that!

It has taken me 8 years and 2 months to reach this milestone of 1000 spottings. That works out almost exactly as 1 spotting every 3 days. I didn't have a great back catalogue of photos to draw upon, so I've pretty much just plodded along from one upload to the next. Slow and steady wins the race, right? I'm proud of my country's amazing wildlife, and I trust that I've made a worthy contribution to the Noah community by way of my spottings. This has been the most amazing platform to share my wildlife encounters, and I've made so many friends along the way. :-) Finally, I dedicate this spotting to my dear friend Judith Ariel Pye. In spirit, as in life, she has been with me for so much of my journey. She was definitely a child of nature, and had a great and genuine love of the natural world. May she Rest in Peace.

Thank you, Mel and Ornithoptera80, for your kind words. I enjoy telling the stories because they add another dimension. I wish I could add the smells add the Australian bush, because it's something I've always found very unique. Yes, here's to the next 1000 :-)

Congrats, Enjoy the notes and series of pictures within every spotting.

What a brilliant spotting to mark such an amazing milestone. Thank you so much for your spottings and insight to the wildlife of Austtralia. Here's to the next 1000!!! :-)