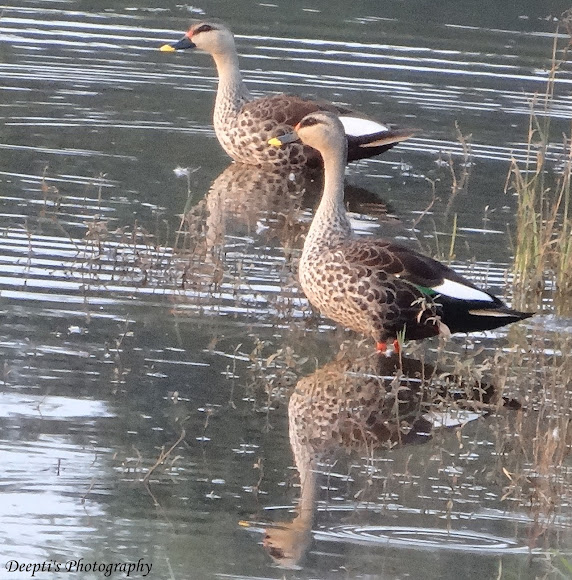 Haven’t seen them here before. Perhaps they have migrated from a different location, for the winter. This duck is around the same size as a mallard and has a scaly patterned body with a green speculum and a band of white tertials that is prominent in flight. At rest the white stripe stands out and the long neck and the bill with yellow tip and orange red spots at the base are distinctive in the nominate subspecies. These are mainly grey ducks with a paler head and neck and a black bill tipped bright yellow. The wings are whitish with black flight feathers below, and from above show a white-bordered green. The male has a red spot on the base of the bill, which is absent or inconspicuous in the smaller but otherwise similar female. The male does not have an eclipse plumage. Juveniles are browner and duller than adults. The legs and feet are bright orange. Both males and females undergo a complete postnuptial moult, dropping all their wing feathers simultaneously.

When I went across the river that afternoon, these birds weren't there. But while I was returning back, just before the sunset, I came across these spectacular dabbling ducks in the river. Probably these birds are very shy and doesn't prefer the humans to be around, so they turned up only after they saw that it was about to be dark.

The phylogenetic placement of this species is highly debated. The eastern spotbill is often considered a distinct phylogenetic species by many taxonomists. And while molecular analyses and biogeography indicate that most species of the mallard group in the genus Anas form two distinct clades, hybridization between all of these species is a regular phenomenon and hybrids are usually fully fertile.