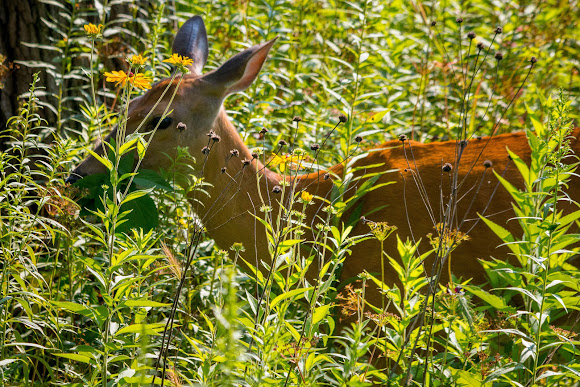 The deer's coat is a reddish-brown in the spring and summer and turns to a grey-brown throughout the fall and winter. The deer can be recognized by the characteristic white underside to its tail. It raises its tail when it is alarmed to warn the predator that it has been detected. Female with tail in alarm posture A population of white-tailed deer in New York is entirely white (except for areas like their noses and toes)—not albino—in color. The former Seneca Army Depot in Romulus, New York, has the largest known concentration of white deer. An indication of a deer age is the length of the snout and the color of the coat, with older deer tending to have longer snouts and grayer coats. Strong conservation efforts have allowed white deer to thrive within the confines of the depot. White-tailed deer's horizontally slit pupils allow for good night vision and color vision during the day. Whitetails process visual images at a much more rapid rate than humans and are better at detecting motion in low-light conditions. The white-tailed deer is highly variable in size, generally following both Allen's rule and Bergmann's rule that the average size is larger farther away from the equator. North American male deer (also known as a buck) usually weigh 68 to 136 kg (150 to 300 lb), but mature bucks over 180 kg (400 lb) have been recorded in the northernmost reaches of their native range, namely Minnesota, Ontario, and Manitoba. In 1926, Carl J. Lenander Jr., took a white-tailed buck near Tofte, Minnesota, that weighed 183 kg (403 lb) after it was field-dressed (internal organs and blood removed) and was estimated at 232 kg (511 lb) when alive. The female (doe) in North America usually weighs from 40 to 90 kg (88 to 198 lb). White-tailed deer from the tropics and the Florida Keys are markedly smaller-bodied than temperate populations, averaging 35 to 50 kg (77 to 110 lb), with an occasional adult female as small as 25 kg (55 lb). White-tailed deer from the Andes are larger than other tropical deer of this species, and have thick, slightly woolly looking fur. Length ranges from 95 to 220 cm (37 to 87 in), including a tail of 10 to 37 cm (3.9 to 14.6 in), and the shoulder height is 53 to 120 cm (21 to 47 in). Including all races, the average summer weight of adult males is 68 kg (150 lb) and is 45.3 kg (100 lb) in adult females. It is among the largest deer species in North America, and the largest in South America

This deer was being eagerly watched by the red-tailed hawk in this spotting :https://www.projectnoah.org/spottings/444533379.

see also this spotting of the same species in the same location one month later: https://www.projectnoah.org/spottings/11...