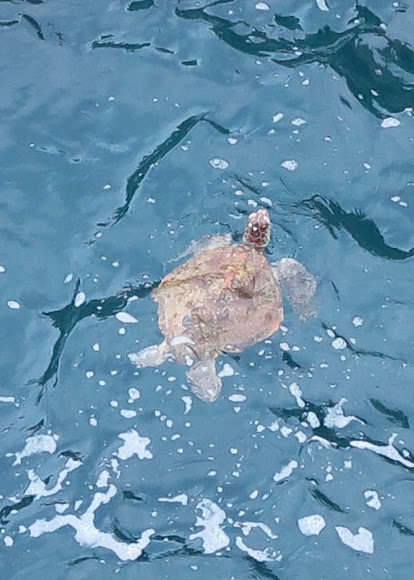 A "bird's eye view" of adult Green Sea Turtles in rough coastal waters. There were at least four adults that I spotted here, and I feel so fortunate to have seen them from this vantage point and at this location, because it was a whole sensory experience of sights, sounds, and smells. These aren't beautiful underwater photos, but I really don't think that matters. The mood experienced here was very powerful in every sense of the word. There's even a large blowhole on the other side of this outcrop, so as the waves rolled in, the rock would breathe. Two more turtles were spotted in open water further around the headland.

Point Lookout on North Stradbroke Island. Deep water channel between a large rocky outcrop and headland, in an area known as North Gorge. It can be clearly seen on the map, and the YouTube video shows an aerial view of the exact location of this spotting (1 min 25 sec into video).

The lookout itself was probably 50 - 60 meters above sea level. The agitated water didn't seem to bother these guys at all, and they all seemed to return to one particular location which was in a slightly more sheltered area, I think to feed on seaweed. Great White Sharks are also known to frequent these waters. Global conservation status of Green Sea Turtles is "endangered". They are listed as "vulnerable" in all Australian states and territories. In Australia, they are a protected species.

Flee those cold southern climes. All are welcome.

Sounds good Neil. At least it's a civilised climate there in June.

My life is a harsh existance, Martin. Too many places to explore and too much leave accumulated. I worry about that haha. If you have time in June, perhaps we could get the local tribe together for a day out. I'm sure we'd have a few takers.

Man, its a hard life Neil.
Great sight!
I'll head up to Brisbane in June.

North Gorge!!! I couldn't remember its name. Friends of mine say they've seen sharks and manta rays in the gorge as well. We stayed for about half an hour, but I'm heading back in late Feb for a few days. I didn't know you're a painter. A man of many talents :-)

Brilliant Neil. I've painted North Gorge. Amazing place. It's possible to see whales, sharks, turtles, mantas, and many others all at the same time.