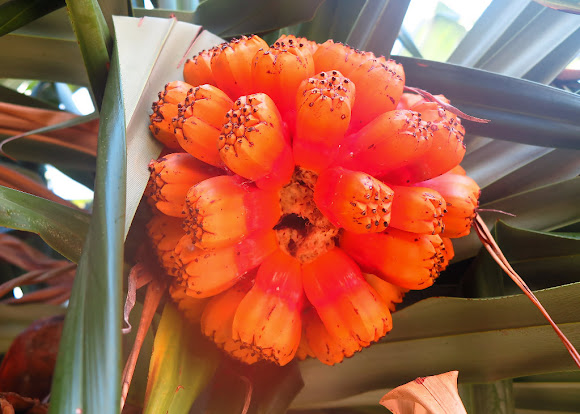 Pandanus Palm is a small tree that can grow up to 10 metres in height, and is native to the northern regions of Australia. It belongs to the family Pandanaceae. It is also found growing in the wild in northern West Bengal and Sikkim regions of India. It is commonly called Screw Palm or Pandanus Palm despite not being a true palm. It has spined leaves in a spiral arrangement. Wildlife including birds take advantage of the spiny leaves by living in the tree for protection. They also favour its fruit which occurs as large, pineapple-like clusters that turn orange-red when ripe. This plant has many traditional uses, but will also leave a mighty mess of dead leaves in the garden (photo 5).

Spotted near North Gorge at Point Lookout on North Stradbroke Island. Exposed headland area with native vegetation, extreme winds (at times), salty air, and sandy soil. Full all-day exposure to the sun. Naturally seeded trees, and quite prolific on this part of the island, particularly around the rocky headlands and beachfront areas. Pandanus occurs naturally in Queensland, the Northern Territory and extreme north of Western Australia, and is most commonly found growing along watercourses or coastal fringes and dune systems.