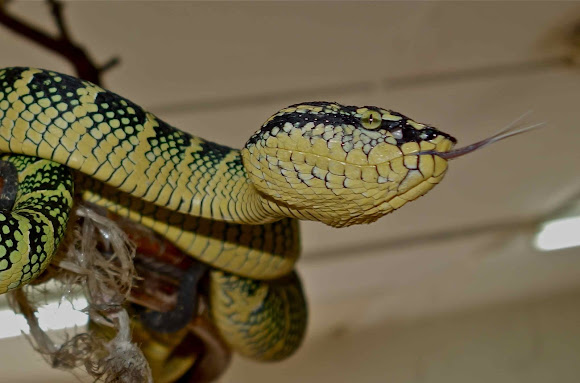 Tropidolaemus wagleri is a venomous Pit Viper species native to South East Asia, however, it is a non-agressive snake They are also referred to Temple Pit Viper because of their presence in a Taoist Temple in Penang, Malaysia. This species is sexually dimorphic: the females grow to approximately 1 m (39⅜ inches) in total length, while males typically do not exceed 75 cm (29½ inches). They have a large triangular-shaped head, with a relatively thin body. They are almost entirely arboreal, and the tail is prehensile to aid in climbing. They are found in a wide variety of colors and patterns, often referred to as "phases". In the past, some researchers classified the different phases as subspecies. The phases vary greatly from having a black or brown coloration as a base, with orange and yellow banding to others having a light green as the base color, with yellow or orange banding, and many variations therein.

Tropical forest but this few Pit Vipers lives in a Taoist Temple in Penang. They are not in cages and are free to roam around the Temple premises.