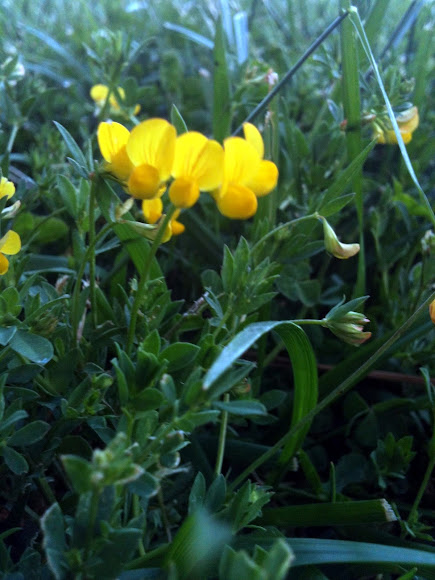 Bird's-foot Trefoil grows throughout the Pacific Northwest and is a coastal bloomer as well as in other habitats. This perenial herb is also known as birdfoot trefoil, bloomfell, cat's clover, crowtoes, and ground honeysuckle. Its leaves are finestemmed and composed of 5 linear leaflets. In many places of the Northern US this plant forms dense stands. Its easily identified from a distance because of the many clustered faboid-like yellow flowers that can turn a reddish shade with age. It is considered a weedy species in some localities however. It has a deep rootstock and comes back year after year. It tolerates both wet and dry conditions due to this deep root base.

The plant is not native coming from both Eruasia and North Africa. Here it is planted for pastures.

This plant was introduced from Europe and is now used in the US as an agricultural crop. It is one of the few legumes that does not cause bloat in cattle. Because of this is is increasingly important as a pasture and a hay crop.