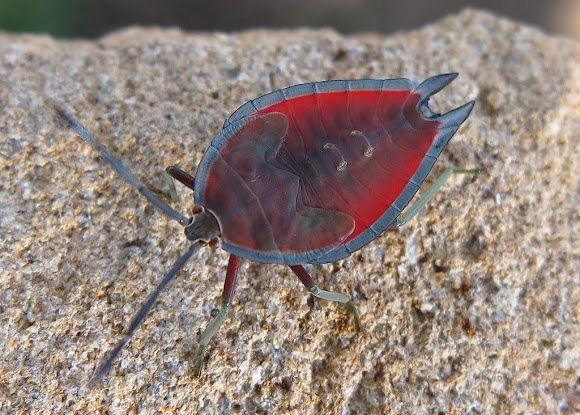 I found this unusual stink bug yesterday, but there's very little info to be found online for this one, even on the usual bug sites like Brisbane Insects. What I have discovered is that there are two subspecies - rosea and pallida - common names Litchi, Lichi, and Lychee. Not to be confused with the Asian species "Lychee" stink bug (Tessaratoma papillosa). This fellow was approx. 1.5 cms in length, and very flat in appearance. Bright red in colour with grey border. It's a native species with distribution from FNQ to SA. http://www.environment.gov.au/biodiversi... As the wings have not yet formed, this spotting is nymphal. Another site - http://www.saveourwaterwaysnow.com.au/01...

Spotted beneath a tree at the Metroplex on Gateway estate in Brisbane QLD. I think the tree might be Red Ash (Alphitonia excelsa), a native which is a favourite of many stink bug species. Have also spotted other species of stink bug in this same area.

I've worked in this area for over 8 years and am familiar with the location, but it's the first time I have ever come across this species. It certainly hasn't been for the lack of interest or observing the environment.

Thank you all for the congrats. I never knew a stink bug could be so popular. It is a pretty one though.

Congrats Neil! Is a beauty.

Thanks guys. Cheers for the link too, Martin. And Mark, as long as it doesn't do its stinky thing on me, all is good.

It may stink and it may be a bug but it's all good. :) Congrats.

Congratulations Neil
I've seen the nymph in FNQ
http://www.projectnoah.org/spottings/113...
Yours looks like possibly an earlier instar.

Sweet :-) Thanks, Yasser. I'll let the little bloke know when I get to work tomorrow.

And congrats to you too, Neil! Awesome it was a first for you as well :)

Congrats Neil! This colorful little stink bug is our Spotting of the Day! Thanks for sharing this beauty and so many others with us. All the best and congrats again!

Thanks, Antonio. Took a while to spot this one, but it was worth the wait.

Thanks, Sunny and Desmond. My first encounter with this species. I know this area like the back of my hand, but it's taken 10 years to meet this guy. He's a beauty.

Thanks, Viv. It was quite by chance. He landed on my lap and wanted to share my lunch. Photo opp!!

Thanks Tony and Renee. It is a beautiful bug, and the colour was quite sensational in the dappled light. My first encounter with this species.

Thanks, Mark. I should have known that. Will try and get some more info on this species.