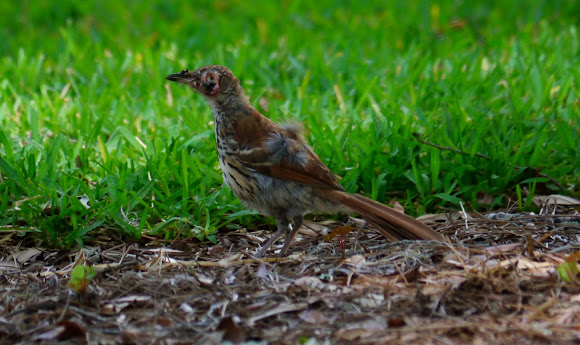 This bird is NOT injured - it has a second bird face growing out the side of its head. This is known as a Siamese twin. If you look careful you can make out both eyes, and the beak, which is protruding out towards you. Description of a normal Brown Thrasher (this one is a Juv) Large long-tailed songbird. Upperparts bright rufous. Underparts white or buff. with black streaking. Immature Description Juvenile looks similar to adult, but upperparts with indistinct buff spotting, wingbars buff, and eyes gray.

While walking in the park across from where I work, I started to video what I believed was just a young Brown Thrasher thrashing about amongst the leaves. I was totally surprised when the bird turned the other direction and I noticed this face on the side of it. At first I had thought that he had been attacked and injured, but upon closer inspection-noted that was not the case at all. He was acting perfectly normal for a thrasher, and as you can the other side of him was normal with the exception of the bump on the top beak. I hope to be adding the video later, as not sure if I have it here at work.

I thought the same thing CoastalJHawk, but it seemed to be doing fine. Though I have searched for it daily since seeing it, and haven't seen him again.