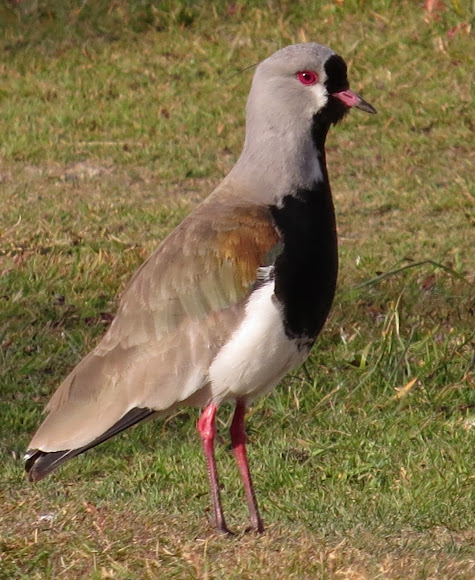 The Southern Lapwing is a beautiful bird with bright red eyes. It calls very loudly whenever people are nearby and it is startled.

The Southern Lapwing is a conspicuous inhabitant of grasslands and pastures from Panama and northern South America south to Tierra del Fuego. A large, crested lapwing, the Southern Lapwing has gray brown upperparts with a bronze sheen, a black breast band that extends up to the bird’s forehead, wing spurs, and a white belly and undertail coverts. Southern Lapwings feed mainly on insects, as well as small fish and aquatic invertebrates. Southern Lapwings are largely sedentary, but populations in the extreme south of their range migrate to warmer areas in the winter. These large plovers are well adapted to human disturbance and are increasing their range in response to deforestation and cultivation. Cornell Lab of Ornithology, Neotropical Birds http://neotropical.birds.cornell.edu/por...