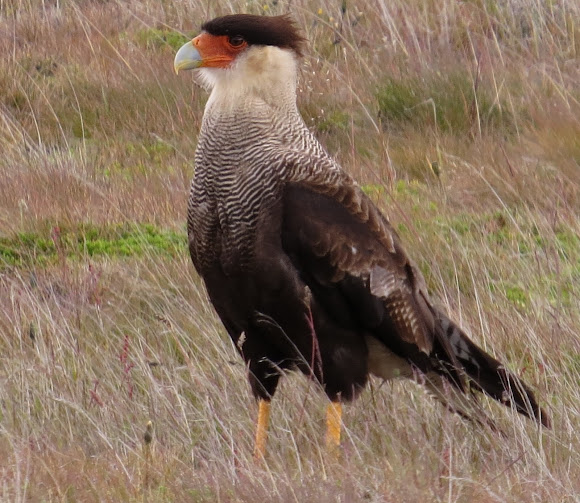 Spotted this Southern Crested Caracara along the main road in Torres del Paine National Park, Chile. It was the most frequent raptor I saw during my entire 3-week visit. I once saw a group of 10 birds.

The Southern Caracara is a distinctive raptor that occurs widely in open areas of central and southern South America. It inhabits agricultural land, grasslands, marshes, and open forest primarily in lowlands from eastern Brazil and extreme southern Peru south to Tierra del Fuego and the Falkland Islands. It is dark brown overall with white on the face and neck becoming heavily barred with dark brown on the upper mantle and breast. The rump, undertail coverts, and tail base are also white, and there are white patches on the primaries that are visible in flight. This species closely resembles the allopatric Crested Caracara (C. cheriway), but has more barring on the chest and more pale color in the mantle and scapulars. It feeds on a large variety of items, but particularly carrion, reptiles, and arthropods. The large nest is constructed of sticks and positioned high on a tree or cactus or on the ground. Largely sedentary, this species may disperse or wander periodically. Cornell Lab of Ornithology, Neotropical Birds http://neotropical.birds.cornell.edu/por...

It was Marta--I love raptors and it was a treat to see so many of them.

hahaha..sorry..my keyboard is acting up on me:
I meant "It must have been such a blast to see this bird!"..Now... :-D

No problem--I just learned there were northern and southern species.

Thanks Desmond! The one you saw is the northern caracara (C. cheriway). They are very similar in appearance.

I saw one of these in Mericopa county, AZ. Nice Spotting!