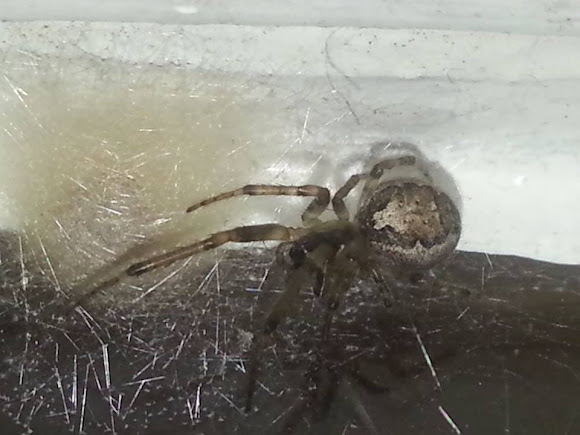 Z. x-notata females are up to 11mm in size, males up to 7mm. The prosoma is yellow-brown, with a leaf-like mark on the opisthosoma. In moderate climate, adults appear from July to October, sometimes even into December. In warmer regions, they are active all year. This spider builds its web mostly into window frames, but can also be found on walls, fences, or under the bark of old trees. It is very common around boats and docks throughout the world.

Adult spiders build an orb-web usually with two sectors without connecting threads in one of the two upper corners. The signalling thread in the middle of these sectors leads to the spider's retreat. In the evening and at night, however, the spider sits in the center of the web. It renews the web in the morning hours. A normal web consists of about 25 to 30 radial threads. Young spiders, and sometimes adults, build webs without the free sectors, especially if the angle between signalling thread and radii gets too big. this is an adolescent female z.x-notata guarding her Egg sac, I must give her credit as she has sat tight through the storms.Catching prey is instinctive in Zygiella in which it differs from other Araneidae, who have to learn this behavior. When alerted by movements of caught prey, the spider moves along the signalling thread into the web center, to orient itself. The killed and wrapped prey is moved to the hideout.

added new pictures to this as our little lady sector spider has spun a second egg sac, much to my delight!!

Wow - another first spotting of this species on Noah according to my search for the scientific name. Well done, Janine!