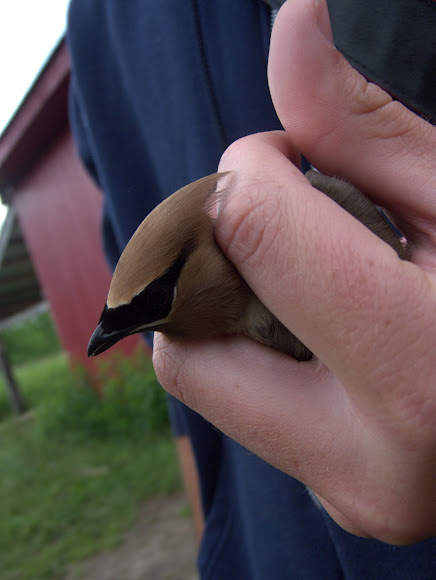 Medium-sized and sleek. Has a large head, short neck, and short, wide bill. Waxwings have a crest that often lies flat and droops over the back of the head. The wings are broad and pointed, like a starling’s. The tail is fairly short and square-tipped. (allaboutbirds.org)

Edge of wooded areas, places with access to berry sources and fresh water. Attracted to the sound of running water. Social birds, live in big groups.

(Wikipedia) Eats berries and sugary fruit year-round, including juniper berries and ivy berries, with insects becoming an important part of the diet in the breeding season. Its fondness for the small cones of the Eastern Redcedar (a kind of juniper) gave this bird its common name. When the end of a twig holds a supply of berries that only one bird at a time can reach, members of a flock may line up along the twig and pass berries beak to beak down the line so that each bird gets a chance to eat. During courtship the male and female will sit together and pass small objects back and forth, such as flower petals or an insect. Mating pairs will sometimes rub their beaks together affectionately. **Caught by BRI wildlife research biologists, as part of migratory bird banding and study. **