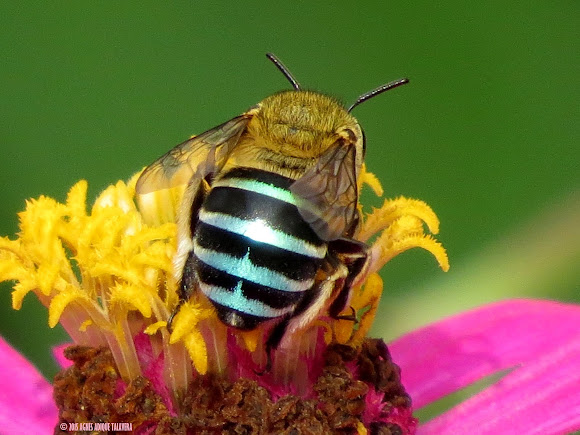 Amegilla cingulata (Fabricius, 1775) (Apidae; Anthophorini), is commonly known as the Blue-banded Bee. A. cingulata is native to Australia, Papua New Guinea, Indonesia, East Timor, Malaysia and India. These bees inhabit urban areas, woodlands, forests and heath areas. Blue-banded bees can sting but are not as aggressive as other bees. They have pale opalescent blue stripes on their abdomen. The male can be distinguished by the number of complete bands, having five as opposed to the females' four. A. cingulata can grow to 10–12 mm.The males cling to plant stems during the night. They are solitary creatures, with single females inhabiting burrows in the soil or soft stone, unlike social species such as honey bees which live in large colonies. (Wikipedia)

wow that is a beautiful bee, I love that shade of blue