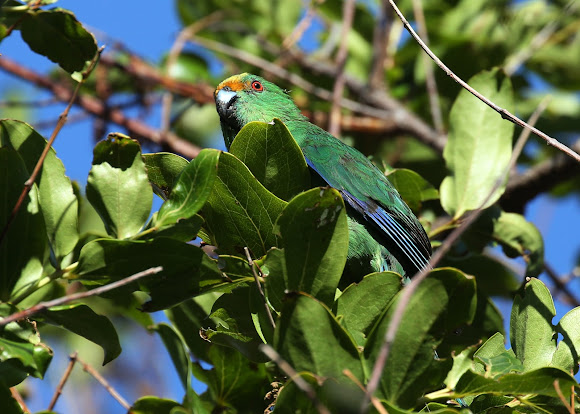 Also known as Malherbe's Parakeet, this small, critically endangered, endemic parakeet is considered one of New Zealands rarest birds. At 23-27cm long and weighing in around 50g (females a little smaller), this is a bright green bird with a dark blue outer wing. The forehead is yellow with a diagnostic orange stripe over the top of the bill. Eyes are red in adults and bill and feet grey. Shown here is an adult in worn basic plumage.

Found in depressingly fewer numbers in a few isolated valleys in central South Island in native beech forest and released on a handful of predator free islands. Once common through large areas of the South Island, the population is still declining. New Zealand suffered a catastrophic 'beech mast event' in 2014-2015 with huge amounts of beech tree seed being produced. This in turn fed an explosion in mice and rat numbers which fed other bigger predators like stoats. Not good for a little bird that nests in tree holes and spends a lot of time on the ground. Following PN protocol on critically endangered species, the actual location has been modified.

The name Malherbe's parakeet was given to this bird to try and prevent confusion with the Orange-fronted Conure of America. Once considered a sub of the Yellow-crowned Parakeet, exhaustive DNA profiling has conclusively proved this to be its own species. Ref: NZ Geographic issue 147. Worth a look for those interested. www.nzgeo.com/curtain-call

Thank you so much for the SOTD and to everyone that has commented and liked this spotting. I am happy to try and lift the profile of this gorgeous little bird here.

Congrats on another incredible spotting and SOTD! ...and for spotting #250 :).

Congratulations Robert and thanks for bringing us images of this rare bird, it is our Spotting of the Day:

Great series of photos. Such a shame to see another of NZ's beautiful native birds teetering on the edge of extinction.