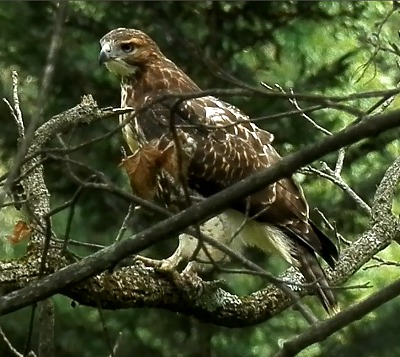 The tail (seen most clearly in the 5th pic) does not seem particularly red to me, but the underside of the wing (partially seen in picture 3 as the bird steadies itself while turning around on the branch) matches the description of Red-tailed Hawks. The markings on this Hawk seem a bit different from my previous posting (yesterday: http://www.projectnoah.org/spottings/132...) but as that bird was in a shadowed area, I can't be 100% certain.

Suburban neighborhood with several mature trees (mixed). The trees are tall enough to nest in. This hawk was parked in our walnut tree quietly grooming itself. The area is also host to a good deal of bugs and birds (small and medium sized), chipmunks, frogs, snakes, and rabbits, as well as racoons, foxes and deer.

I was gazing out of the window for a moment or two before realizing this bird was right in front of me. As soon as I did notice it, it noticed me notice it and became a little ruffled. My /presence/ was apparently not a bother, but my /attention/ was unwanted. It did seem slightly more at ease when I turned my body away, but wasn't really fooled. When it flew off, it swooped down to land on the ground briefly, so perhaps its decision to leave was due to spotting a snack, rather than all of my staring. I've seen some distant evidence of hawks in the area before, but these past 2 days are the first time I've gotten a good look at them.

Exciting! What fantastic news! (that I may get to see more of them, not the fines). I did notice a large nest about 50 feet up a pinetree last year but I was never sure if it was something that was in use or what. Small birds nested in the same conifer and it seemed unlikely anything that'd eat them was above but the nest never disintegrated either. It'll be delightful watching them in either case. Interestingly, just after reading your post I spotted them twice more (not at the same time, but one was definitely smaller than the guy pictured on this page). Thanks for the warning about collecting the feathers! I'll let nature keep'em. :)

Nest fidelity is pretty high in Red-Tails...the adults mate for life and will probably stay together for the winter...they'll come back each year to the same nest...this baby will be pushed out of the territory next spring when the parents are ready to nest again. If you don't have a nesting pair around, you may have a future resident! They definitely are fun to watch! Careful about keeping feathers...they're illegal to possess and our fines in Colorado are up to $1000 or like a year in jail...not sure what they are in MD.

Thank you, Christy! So if I find his feathers about this winter I can safely assume he lives quite nearby enough that I might get chances to see him/them close up again as they grow up? That would absolutely thrill me.

Beautiful series, Raeven! These are indeed pics of a juvenile Red-Tailed Hawk. The tail is NOT red in the first year...he will moult this winter and the red tail will emerge. His eyes are light and will darken significantly in the next 4-5 years as he reaches adulthood. Right now juvenile hawks are learning the ropes of life! Your other spotting looks like a Red-Tail as well...fascinating to watch them eating! What a cutie!