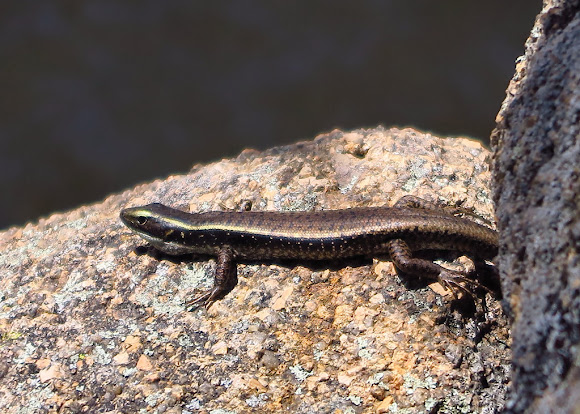 There are 389 species of skink in Australia, which is about half of our lizard species. The Eastern Water Skink is a medium sized, stocky, long-tailed skink, coloured dark brown to olive above and cream to white underneath. The tail is usually olive green. It has obvious external ear hole. It has a sleek body and short legs, and can grow up to 30cms, tail included. It feeds on other lizards, freshwater shrimp, and insects (aquatic and land).

Spotted amongst boulders along Bald Rock Creek in Girraween National Park. Very much an aquatic environment which these skinks love. Here's some park info - http://www.rymich.com/girraween/

A long shot, so lost some clarity. Lizards are awesome, and I never tire of seeing them.

389 species of skink, half that of your lizard species! Sounds like a field day to me. Nice shot.

He was living in a pretty cool spot too. Great for summer.