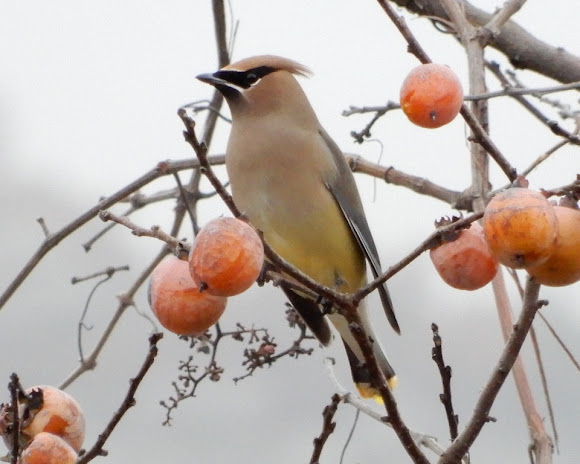 Cedar Waxwing spotted eating(?) some of the persimmons, which I originally thought to be plums :) spotted in the Wichita Mountains Wildlife Refuge, OK. These birds are quite common in the refuge during the autumn/winter months, and are often seen in large numbers in trees. On this particular day, in this persimmon tree, there were approximately 15 of the birds roosting/feeding together.

Preferred habitat consists of trees at the edge of wooded areas, or "open" forests, especially those that provide access to berry sources as well as water, and they are frequently seen in fruiting trees. Cedar Waxwings are attracted to the sound of running water, and love to bathe in and drink from shallow creeks. Outside the breeding season, cedar waxwings often feed in large flocks numbering hundreds of birds. This species is nomadic and irruptive, with erratic winter movements, though most of the population migrates farther south into the United States and beyond, sometimes reaching as far as northern South America. They will move in huge numbers if berry supplies are low. Rare vagrants have reached western Europe, and there are two recorded occurrences of cedar waxwing sightings in Great Britain.

The Cedar Waxwing eats berries and sugary fruit year-round, including: dogwood, serviceberry, cedar, juniper, hawthorn, and winterberry (and persimmons, as depicted!); along with insects becoming an important part of the diet in the breeding season. Its fondness for the small cones of the eastern red cedar gave this bird its common name. When the end of a twig holds a supply of berries that only one bird at a time can reach, members of a flock may line up along the twig and pass berries beak to beak down the line so that each bird gets a chance to eat. Sometimes, cedar waxwings will eat fruit that is overripe and has begun to ferment, intoxicating the bird.

Thank you to all who made this my most "popular" spotting to date! I am personally surprised by the popularity of this little fruit eating bird, but glad everyone enjoyed viewing the series as much as I enjoyed photographing it!

Beautiful series SargonR,congrats on the well deserved SOTW and thanks for sharing

Congratulations on the SOTW...great shot.

Congratulations SargonR, this lovely series has been voted Spotting of the Week! We enjoyed reading the discussion!


"There is a sweet seasonal feel to our Spotting of the Week, a Cedar Waxwing (Bombycilla cedrorum) seen at the Wichita Mountains Wildlife Refuge (Oklahoma, USA). Cedar waxwings are native of North and Central America, and feed mainly on berries and sugary fruit. This spotting triggered an interesting conversation between Project Noah users regarding the nature of the fruit around the bird. These are American persimmons (Diospyros virginiana), which are valued by waxwings and mammals as winter sustainance".

I would have taken a million shots too - what beautiful plumage! handsome bird and lovely series. Thanks for sharing this beauty SargonR.

SargonR, you could test our theory the hard way and take a bite of one of the fruits which has not fallen (and is difficult to pluck from the branch). ;) American persimmons which are unripe (and have not fallen yet) are very astringent and will make your mouth pucker up! They are delicious when ripe, however!

I'm not a plant expert, but I agree with flowntheloop. I found this link with persimmons that look like the ones in your photos. Also, it says on the page that cedar waxwings eat persimmons... http://wordpress.arkansasmasternaturalis...

American persimmons can have 1-8 large seeds and have a large crown-like calyx (which are present in your photos) where they attach to the branch. I'm pretty positive plums do not have the latter feature. Sorry to distract from your beautiful spotting!

Are those persimmons or plums? They look like American Persimmons (Diospyros virginiana). Beautiful spotting either way! :D

Pleasure to share. I had never seen these birds prior to moving to Oklahoma, so they are a new site to me!

Always a pleasure to see these guys. Thank for sharing your great images.