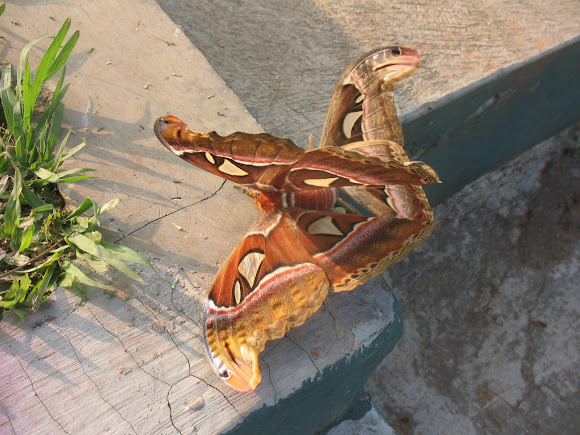 atlas (Attacus atlas) is a species of moth are relatively rare because of the difficulty encountered every day. Large moth is commonly called the greedy. That's because when a caterpillar, the animal was eating very much. One day could spend four leaves. Avocado tree, for example, it can be spent by the greedy, the However, greed atlas is reasonable. Because once it becomes a moth, it atlas can not eat. Having no mouth, Because not eating, age atlas moth is fairly short compared to other ,moth species. He was about five days, atlas into the kind of strumpet. So that during the day, rarely seen fluttering moth. Size atlas longest can reach 30 centimeters..

Great capture.
I've created a mission so we can document the wide variety of arthropods in Indonesia. It's here if you are interested.
http://www.projectnoah.org/missions/1773...

Azura, I didn't know that the world's largest moth didn't even have a fully developed mouth! This beautiful moth is even more fascinating to me now. Thanks for sharing.

Great spotting Azura. You are lucky to have the biggest moths in the world.

I that a picture of one or two, because it looks like their mating.

Azura Firdaus W, Attacus atlas is a moth not butterfly. In your information given, you have mention this species as butterfly. Please correct it..

this moth has a very good camouflage strategy!