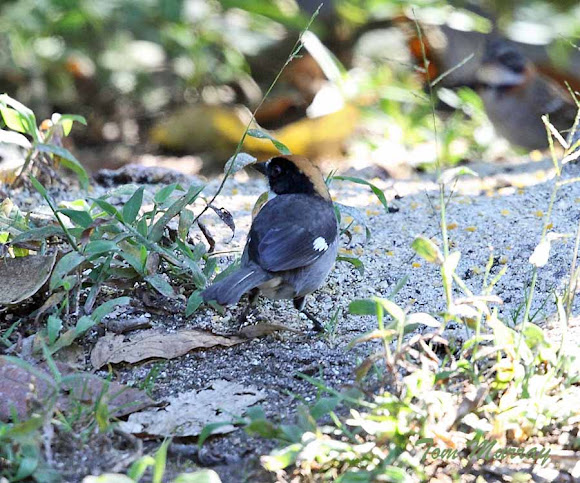 If you were to choose any brush-finch to call slaty, actually this is the one, so that is good! Although geographically variable, all members of this species are largely grayish varying from paler grey to dark blackish-grey, but in the broad sense they are slaty. All have a russet to cinnamon crown stripe as well. Most forms show a white malar stripe that contrasts with the blackish face and a blackish lateral throat stripe. The one member that did not show this throat pattern is now separated as the Cuzco Brush-Finch. The widespread nominate form is the palest, and it also has a white patch at the base of the primaries that is lacking in other members of this species. What is a little astonishing is that it appears that our concentration on the grayish plumage may have lumped birds that are not each other’s closest relatives in one species! Molecular data suggests that Slaty, Rufous-naped and Yellow-breasted brush-finches are related in an intricate manner; with the loss and gain of yellow underparts in populations such that some forms which may not look alike (grayish versus yellow underparts) may in fact be more closely related than other forms that do look alike! More work is needed in this complex to determine how many species there are. (Cornell)