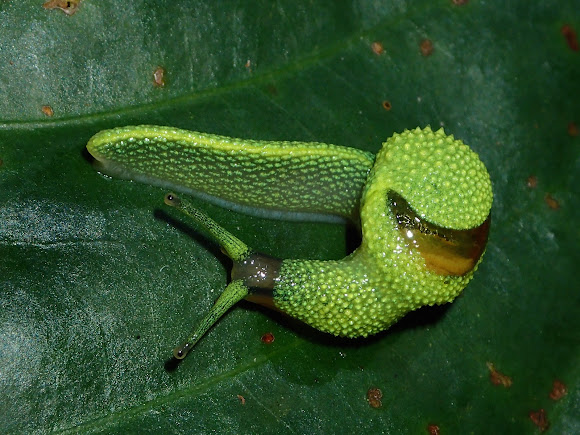 A beautiful green coloured snail/slug with yellowish bumps/tubercles. This Slug was first discovered from high altitude mountain forest of around 1,900 masl in Sabah, Borneo and described in the year 2008. The Slug sports a tail that's three times the length of its head, which it wraps around its 1.6-inch-long (4 cm) body as if a pet cat. In fact, its discoverers initially planned to name the Slug Ibycus felis, after its feline inspiration. Instead, they named it after the girlfriend of one of its discoverers, Menno Schilthuizen of the Netherlands Centre for Biodiversity 'Naturalis.'

The Slug was given its common name; Ninja Slug as there's more to the name than meets the eye: The slug species makes use of so-called love darts. Made of calcium carbonate, the love dart is a harpoon-like structure that pierces and injects a hormone into a potential mate. The dart could increase the slug's chances of reproduction.

Jonathan Sequeira a year ago

Congratulation, for the SOTW, Super.

Marquinhos Aventureiro a year ago

Uday a year ago

I just can't believe how wonderful it is to actually spot one of these in nature! This is amazing @AlbertKang, congratulations!

Thanks, @Tukup and @armadeus.4 for your kind words and support :)

Congratulations on your SOTW Albert! Wonderful shots. Thank you for sharing :)

Congratulations on the well-deserved SOTW Albert. Great shot of an unusual species.

Congratulations on your spotting of the week. Great photos.

Your Ninja Slug spotting has been voted Spotting of the Week.

Thank you for sharing fascinating photos of a special and unique slug of the Borneo rainforest with the Project Noah community!

Wow - this is a fascinating spotting and the information is really interesting!

How do you find these weird and wonderful creatures Albert ? Everything about this slug is fascinating. Thanks for sharing this & your great notes. I wonder if he feels like a rough avocado...

Thank you, Mark for the double cheers! :)

That's crazy Albert. Thanks for sharing this one.

Thanks, @Leuba for your kind words and appreciation.
I guess spending lots of hours in the field and sometimes, getting lucky. Most of the stuff were seen during night walks where those critters are more likely to be out in the open.

How do you find these weird and wonderful creatures Albert ? Everything about this slug is fascinating. Thanks for sharing this & your great notes. I wonder if he feels like a rough avocado...