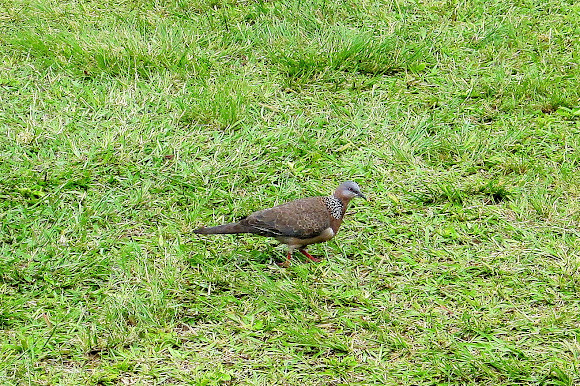 Subspecies chinensis (Hawaii) This dove is long tailed buff brown with a white-spotted black collar patch on the back and sides of the neck. The tail tips are white and the wing coverts have light buff spots. There is considerable plumage variations across populations within its wide range. The species is found in light forests and gardens as well as in urban areas

Originally woodland, scrub, farmland and habitation. Now found in light forests and gardens as well as in urban areas.

Spotted Doves move around in pairs or small groups[15] as they forage on the ground for grass seeds, grains, fallen fruits and seeds of other plants.[16] They may however take insects occasionally and have been recorded feeding on winged termites.[17] The flight is quick with regular beats and an occasional sharp flick of the wings. A display flight involves taking off at a steep angle with a loud clapping of the wing and then slowly gliding down with the tail spread out.[12] out in warm regions but tends to be in summer in the temperate ranges.[12] In Hawaii, they breed all year round, as do all three other introduced species of doves. Males coo, bow and make aerial displays in courtship. (all info from Wikipedia)

Now that's a pretty Dove! Thanks for posting it.