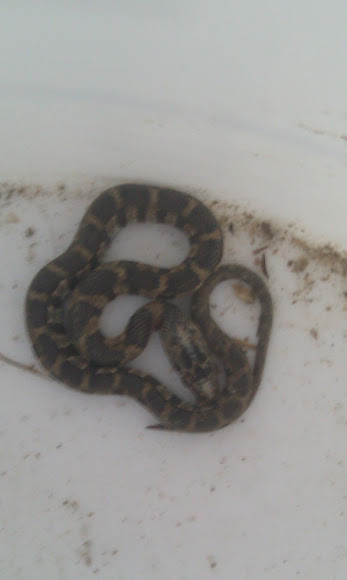 Found in most aquatic situations from lakes, ponds and streams to marshes, bogs and ditches.

I found this little snake at a pool I was managing this summer. I was in the lifeguard house when a child said that there was a Copperhead by the shallow end of the pool. I immediately went to investigate and found this little water snake instead of a deadly Copperhead, right by the waterside of the pool. I grabbed the snake and put it in a bucket so I could take it to be released into the wild. This way the snake wouldn't hurt any of the kids and no one would harm the snake. I released it into the wild shortly after catching it.

Right on bandhturtlesite. Great discussion here with Kevin. Too often, this situation would have turned into a needless snake death. I'm glad you were nearby to relocate this little one and show the kids that it's important to protect these awesome predators.

If it were a copperhead I would not have killed it. I would have done the same thing I did with the water snake. The main concern at the time that I was told about the snake was that a small child may be bitten by a venomous snake. If that were to happen a small child would be of much greater risk of death. It was found on the concrete at the edge of a shallow water area where many small children play. I am all for everything and everyone staying alive and as a veteran Boy Scout of America I am all about preserving ecosystems.

I am glad you correctly identified this snake and rescued it. Though I would not classify copperheads as deadly more deaths are attributed to dogs, horses, fires, cars and much more every year in north america if it were a copperhead would you have killed it? Snakes are important to our ecosystem and you seem to understand this but the venomous ones are just as important, especially in rodent control.