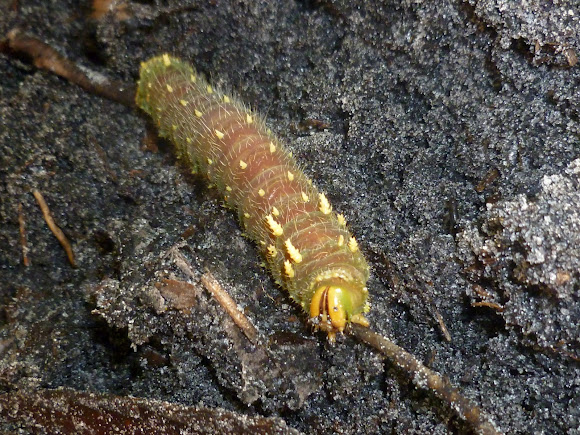 The Imperial Moth lays 1-5 large yellow eggs on a host leaf. The eggs hatch in about 2 weeks. It has 5 instar or larval stages before it burrows into the ground to pupate. At the end of each instar, the catepillar attaches itself to a leaf with a small amount of silk and molts. After a few days, it will emerge from it's old exoskeleton. It puffs up and increases in size before the new exoskeleton hardens. The old exoskeleton can be eaten as a source of protein. The first and second instar tend to be brownish orange progressing to yellowish green as the catepilliar enters it's fifth instar. Each instar has a pair of spined dorsal tubercles on the second and third thoracic segments. It has prominet yellow-white spiracles ringed with black and many long whitish hairs. The adult moth has predominately yellow wings with varied purple markings.

Imperial Moths and their larva are found in deciduous, mixed, and coniferous forests. They range from Mexico to Canada and from the Rocky Mountains to the Atlantic coast. The adult moth is nocturnal and attracted to light. Adults do not feed

I found this larva in moist loose dirt in a wooded area. It was likely feeding on the nearby bald cypress, sweetgum and oak tree leaves. Since it was down in the dirt, it might have been preparing to burrow into the ground and pupate.