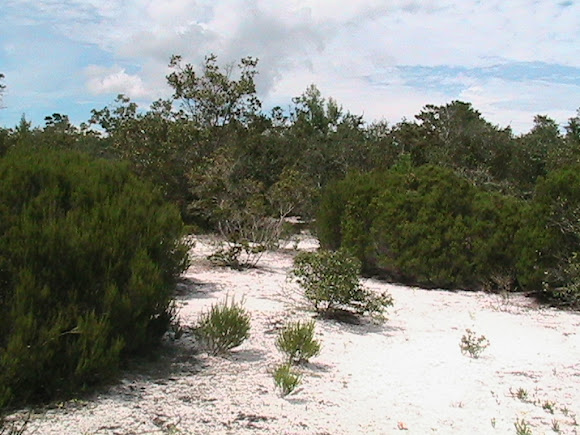 A rather "boring" looking bush --- to someone who doesn't know the secrets of this plant! (See notes, below). Looks very similar to the culinary "Rosemary" many people grow in the garden, but this is NOT edible. Leaves are shorter, but still somewhat fragrant. Individual bushes can become quite large. They make an astounding number of seeds, as seen in my second photo.

In Florida Scrub, the hottest and driest ones, mostly. They are the main vegetation in "Rosemary Scrub". This habitat looks like "a whole lotta nuthin' ", when in fact it is incredibly complex, and probably the most critically endangered ecosystem in the United States. Only 3% is left.

Since the soil in the Scrub is so terribly nutrient-deficient, plants here need to take desperate measures to ensure their own survival. The Florida Rosemary has several tricks. First, it has 2 kinds of roots; one long taproot to hold it down, and other shallow roots that spread out just under the surface, to soak up every possible drop of moisture that may fall. The beach sand is very porous, so water drains off immediately. The other amazing thing is that it is "allelopathic" - the roots create a chemical that prevents any other seeds from germinating in it's general root area, thus eliminating any possible competition- even from it's own seeds. This is why, in a Rosemary Scrub, you will see bare circles of pure white sugar sand around each Rosemary plant! These habitats are called "Rosemary Balds", shown by picture #1. They have a very stark beauty about them. Fire is essential in many of Florida's ecosystems, and the Scrub is no exception. Whereas in Longleaf Pine Sandhills, the fire burns "low and slow", in Scrub, fire burns "Fast and Furious". This kills the Rosemary plant. But NOT the seeds. The heat triggers the germination of the seeds, the new influx of nutrients from the fire (ash) fertilizes it. Now that the parent is gone, there is enough sun to allow the seedling to grow. Other plants have different strategies, which are equally fascinating, but that's for another day!