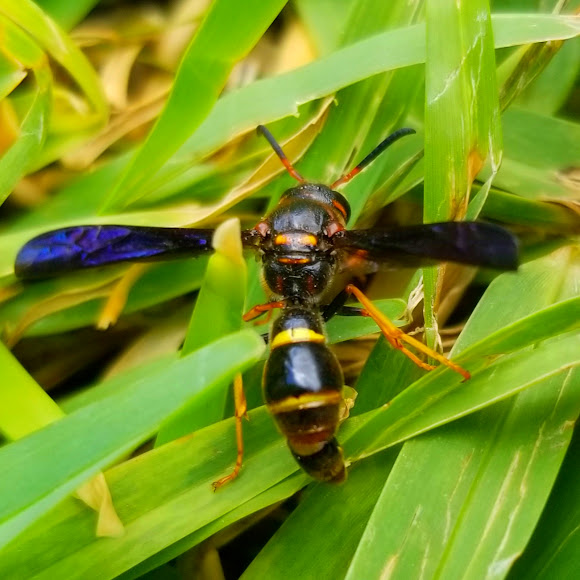 This wasp has metallic black and blue wings with a yellow, black, and red thorax and abdomen.These wasps make mud nests on buildings and other structures making a home for the wasp larvae.The wasps feed their babies caterpillars and spiders that are paralyzed by the wasps sting.The sting of the wasp has a toxin that can paralyze insects that they want to catch.Euodynerus crypticus is a species of stinging wasp in the family Vespidae.Their sting is probably not that painful because their sting is only used to kill insects.This one also has red on the antennae and the same black and red striping on the legs.This species was discovered by Say in 1823.Euodynerus is a genus of potter wasps with a mainly Holarctic distribution, though a number of species extend through Indomalayan, Australasian, Afrotropical and northern Neotropical regions. Also, a single species is reported from Hawaii.Potter wasps (or mason wasps), the Eumeninae, are a cosmopolitan wasp group presently treated as a subfamily of Vespidae, but sometimes recognized in the past as a separate family, Eumenidae.

The other names are Potter wasp or the scientific name, (Euodynerus crypticus). It was sitting on the grass before taking off and flying away. This one was a male with many yellow stripes while females like in the previous spotting have only one yellow stripe.