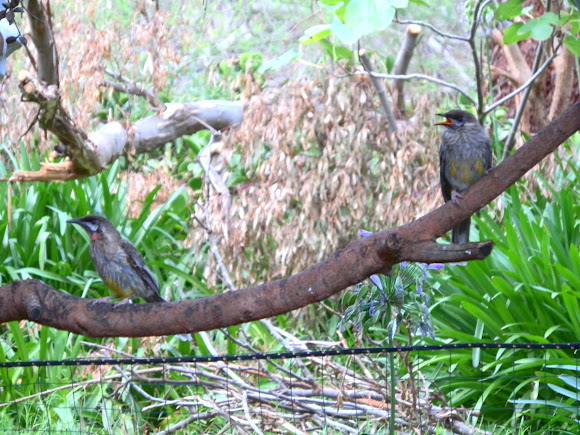 An adult red wattlebird on the left with its baby on the right. Despite several attempts at photographing this bird, I've never been successful with clarity. They are twitchy and merge so well with the trees.
It is possible however, to see some differences between the adult and the young one which is now almost the same size as the parent. Both have streaky grey, white and black plumage with bright patch of yellow on the lower belly and there is a distinct white patch below the eyes.
The adult has a red wattle on either side of neck. The young one has a red mouth.
The other difference is the adults' call sounds like a sharp crack or a raucous string of sounds. The young one on the other hand makes a non-stop chirp urging its parent to keep feeding it.

Suburban backyard. This baby was fledged in this yard and has been flying around with its parent for a few weeks now. This species is seen all along the southern parts of mainland Australia and there are three subspecies.

These birds are predominantly nectar feeders but feed on insects occasionally.
This spotting is mostly for documentation as we are having babies of most birds visit this season.
Family: Meliphagidae