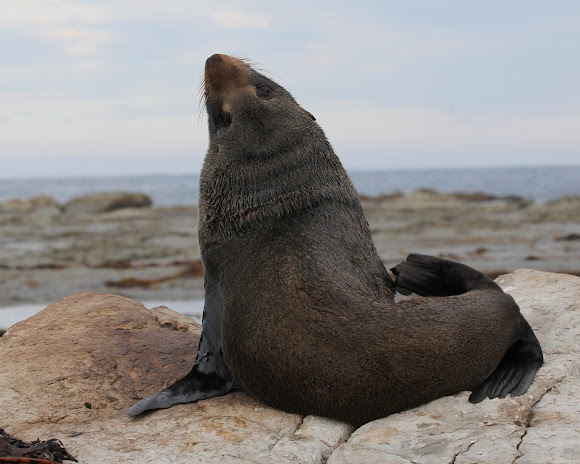 A dark grey-brown fur seal with the males weighing in around 125kg and females around 40kg. The males also sport a much thicker neck and mane. They also have no tear duct so the fur below the eye is constantly wet. Images above show a young male and the last one, a female.

Many areas around the coast of southern NZ and most of the Sub-antarctic islands. Also records showing a return to the southern coast of the North Island. They favour exposed rocky coasts with shallow pools. These images taken at Kaikoura on the east coast of South Island NZ.

An incredible story. Populations were devastated in the late 1700's/early 1800's by European sealers and by 1833 all mainland and most accessible offshore populations of eared seal were all but exterminated. Closed seasons were imposed in 1875 and by 1916, sealing was stopped in NZ. For the NZ Fur Seal, the recovery has been long but successful with a spread northwards and numbers growing both here and in Australian territory.

Thank you DanielePralong, Polilla and Ava for your comments.

This is a lovely and interesting spotting. To make it complete, and useful to researchers using this site for data, please edit this and add a reference (Wikipedia, Encyclopedia of Life, something else) about this species in the reference field of your spotting. Please do this for each photo you post. Thanks for helping to make Project Noah a complete reference tool for scientists.

Beautiful series triggsturner! Also thanks for the info.