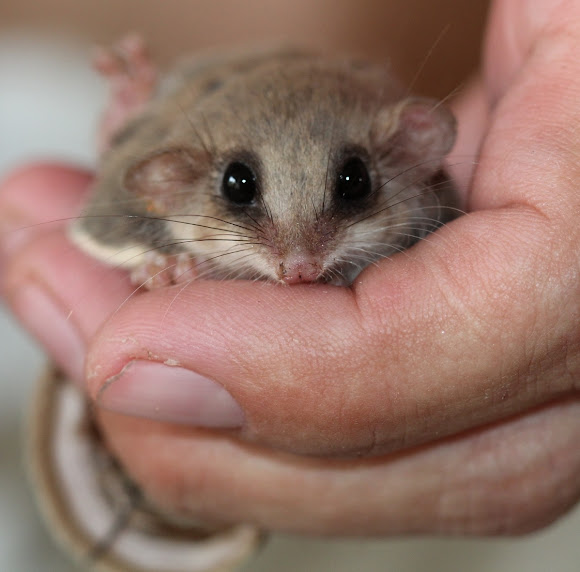 The Feathertail Glider is the world's smallest gliding possum, and can leap and glide up to 25m. The second and third shots in this series show its flat feathery tail, for which it is named.

My husband Nathan (NathBig), a qualified Fauna Spotter/Catcher, rescued this one from a tree that was felled during roadworks near Yuleba. It was snuggled inside an abandoned bird nest. As it is a nocturnal animal, Nathan waited until after dark to release it back into the wild close to where it was rescued (see shots 5 & 6). Update 7/11/14 - Scientific name changed from Acrobates pygmaeus to A. frontalis and common name updated after locating new information re the identification of two separate Acrobates subspecies in the recently published 'Field Companion to the Mammals of Australia' (edited by Steve Van Dyck, Ian Gynther and Andrew Baker).

Updated information due to reclassification as a separate subspecies.

This is brilliant. Nice rescue, and awesome photos of this wonderful little guy.

Adorable little one! ....And such a cute tail! Thanks for sharing, ShannaB!

Fun fact: this adorable little creature is a feathertail glider, a tiny marsupial whose scientific name, Acrobates pygmaeus, provides a clue to its amazing ability of gliding up to 25 meters. It gets its common name from the feather-like structure of its tail, which is unique among mammals. https://www.facebook.com/photo.php?fbid=...

I love you guys. What a great job you do. Fantastic!

What a wonderful team and thank you so much for sharing all to us.

Thanks everyone, this is why I do what i do, makes it all worthwhile when you get to save something like this.

Awesome job you guys! This is a awesome find and rescue all in one. I got excited when I saw this, thanks!

This is very cool.

You can take part of the credit, Shanna. After all, Nathan is your "better half" ;)

Thank you, everyone. I can't take any credit for the rescue - Nath rescued it while at work (that's his job!!) but I went with him to release it. Such a beautiful little creature. We have heard from other wildlife catchers/carers that they can be really 'bitey', but this one was lovely.

Well done to both you and Nathan, Shanna! We have these little lovelies here as well, although it is rare I see them. Hard to imagine a mammal so small - so special.

This is adorable! Top marks to both of you for rescuing this cutie pie.

Very, very cute!! I once found a healthy one trapped in a plastic bucket, it wrapped its tiny tail around my little finger. I wonder how common they really are.

This might be the cutest mammal I have ever seen! So glad Nathan saved it :)

Adorable and very nice series. How lucky this little one to appear in front of you both. Thank you so much for sharing.

Wow !more cute is impossible:-) ,great story,congrats and thanks for sharing

Thanks Maria! Mark, they are pretty elusive. This is the first time I've ever seen one. According to Wildlife Queensland, "feathertail gliders spend up to 87% of their time in trees at heights greater than 15 metres making them the most cryptic and rarely seen of all the glider species".

Wow must see some in the wild.

Wonderful series and thanks to you and Nathan for rescuing these tiny beauty!