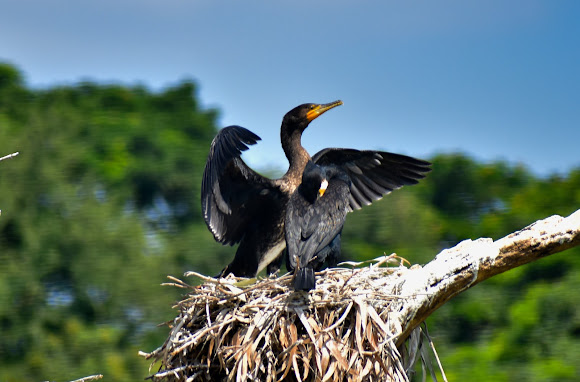 The Great Cormorant is almost entirely black in plumage, apart from a white and yellow chin and a small white patch on each thigh (absent in winter). The bill is grey and the legs and feet are black. Young birds resemble the adults but are more dusky-brown. Great Cormorants are probably the most widespread member of the cormorant family with a range that includes North America, Europe, Africa, China, India, Southeast Asia, New Zealand, Papua New Guinea and Australia. It occurs throughout most of Australia but is more numerous in the south-east and south-west. It has a long neck. Its head is small with a white throat and blue skin around the small eyes. The bill is yellow at the base and darker at the tip. The body is black with a bluish or green sheen.and wings are blackish-brown coloured. During the breeding season there is a white patch on the thigh, and throughout the year a variable amount of white occurs on the crown and back of the neck. Sexes look similar. Young birds tend to have more brownish plumage in comparison to the adults. The diet of great cormorants consists predominantly of fish as well as crustaceans, amphibians, molluscs and nestling birds. At sea the species preys mostly on bottom-dwelling fish from bare or vegetated seabeds, occasionally also taking shoaling fish in deeper waters.

In spite of its preference for extensive areas of permanent freshwater, the Great Cormorant is not confined to these and is often observed on coastal inlets and estuaries. Like other cormorants, the Great Cormorant feeds mainly on fish, supplemented in freshwater by crustaceans, various aquatic insects and frogs. The Great Cormorant is an excellent swimmer and captures its food in shallow underwater dives, normally lasting up to one minute. Underwater, it swims and pursues prey using its feet but not its wings. Outside of the breeding season small groups are formed although birds are often seen fishing alone.

Breeding can occur at any time depending on food supply. Both sexes build the nest, which is a large structure of sticks placed in a low tree or on the ground. Both parents also incubate the eggs and care for the young. Location - Way to Narsapur, Hyderabad, Telangana State, India