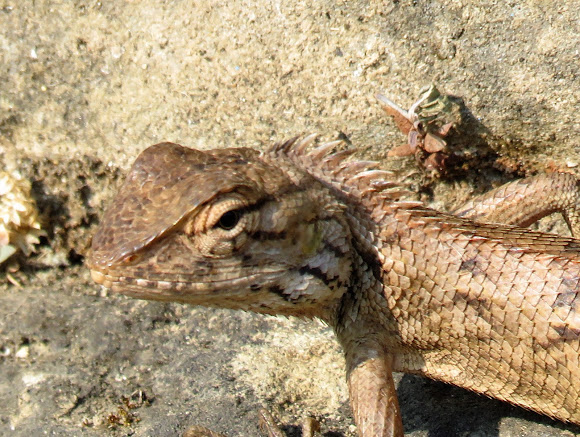 If my ID is correct, this agamid lizard is also known as Eastern garden lizard or Changeable lizard. Pictured here is probably a female (or a juvenile?), earthy brown in color with blackish widely sTotal length of some 30 cm, long thin tail taking some 2/3 of it. The crest is visible but barely, much less striking than in males - it goes from head to the tail. In parallel to the crest, and on each side of it, two lighter colored ridges.

Widely distributed in Southern parts of Asia, here observed in historical site of Mrauk-U in northern Rakhine, at the outskirts of the modern part of town. This is small hilly area, mixture of cultivated fields, heaths and areas under bushes and trees, with some rocky areas as well (photo No 6). It was rather green but dry at the moment and awaiting the rainy season to start.

Photo No. 6: is a very beautiful, and a very colorful, landscape photo....