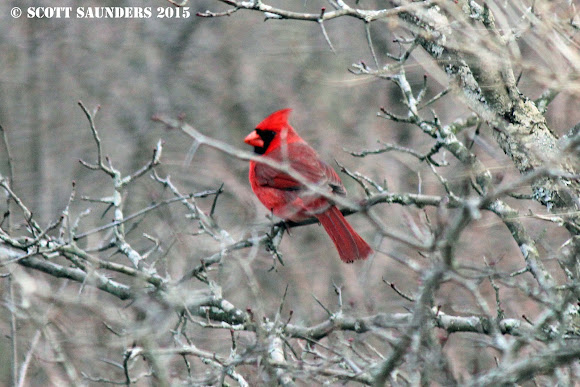 The northern cardinal is a mid-sized songbird with a body length of 20–23.5 cm (7.9–9.3 in) and a wingspan of 25–31 cm (9.8–12.2 in). The adult weighs from 33.6–65 g (1.19–2.29 oz), with an average 44.8 g (1.58 oz).[8] The male averages slightly larger than the female.[9] The adult male is a brilliant crimson red color with a black face mask over the eyes, extending to the upper chest. The color becomes duller and darker on the back and wings.[10] The female is fawn, with mostly grayish-brown tones and a slight reddish tint on the wings, the crest, and the tail feathers.[11] The face mask of the female is gray to black and is less defined than that of the male. Both sexes possess prominent raised crests and bright coral-colored beaks. The beak is cone-shaped and strong.[10] Young birds, both male and female, show coloring similar to the adult female until the fall, when they molt and grow adult feathers.[12] They are brown above and red-brown below, with brick-colored crest, forehead, wings, and tail.[4] The legs and feet are a dark pink-brown. The iris of the eye is brown.[4] The plumage color of the males is produced from carotenoid pigments in the diet.[13] Coloration is produced from both red pigments and yellow carotenoid pigments.[14] Northern cardinal males possess the ability to metabolize carotenoid pigments to create plumage pigmentation of a color different from the ingested pigment. When fed only yellow pigments, males become a pale red color, rather than a yellow.[14] However, there are rare "yellow morph" cardinals, where all feathers (except for black face mask) and beak are a moderate yellow color.

Northern cardinals are numerous across the eastern United States from Maine to Texas and in Canada in the provinces of Ontario, Quebec, New Brunswick and Nova Scotia. Its range extends west to the U.S.–Mexico border and south through Mexico to the Isthmus of Tehuantepec, northern Guatemala, and northern Belize. An allopatric population is found on the Pacific slope of Mexico from Jalisco to Oaxaca; note that this population is not shown on the range map. The species was introduced to Bermuda in 1700. It has also been introduced in Hawaii and southern California. Its natural habitat is woodlands, gardens, shrublands, and swamps.

it was very early am

There's lots out in early am here in Canada

The Cardinal never gets boring to look at. Stunning shot :)