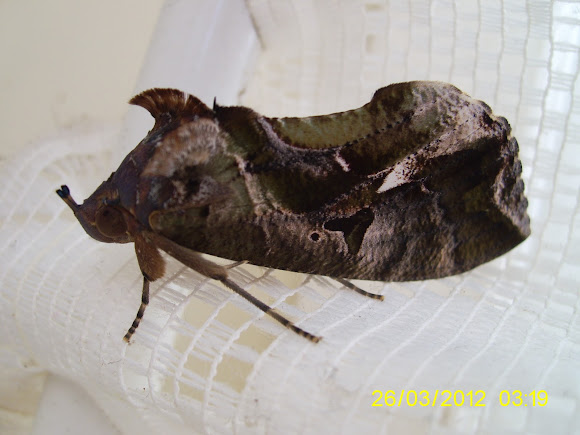 Female:- Adult moths have fawn forewings. Female has a pattern that is more complex- this includes a small, white triangle near the middle of each forewing- this connects to a pale streak, across the wing. Hindwings of both sexes are bright yellow, with a broad, dark border and a big, dark comma, in the middle. Both sexes have a yellow, diagonal band, on the undersides of the forewings. Undersides of the hindwings are like the upper surfaces. The labial palps (labial - of or pertaining to the lips. palps - elongated sensory organs, usually near the mouth) have a blue patch. Moth length about 5cm. Wingspan up to 10cm.

Fruit-piercing Moths are strong flying and adults migrate and are widespread overseas and in the Pacific Islands. During the summer, in Australia, they can migrate South from Northern Queensland, extending its range down the Eastern coast, to Victoria. This moth was resting on a curtain, at a hospital, probably waiting to 'doctor' the patients fruit.

Thank you Ornithoptera80 for the positive identification of my spotting. Family Erebidae. Subfamily Catocalinae. Noctuid - night-flying moths. Adult moths rest on weeds, near the food source, during the day and attack the fruit (ripe or unripe) at night. In torchlight the eyes are large and red-glowing. It is the adult moth that does the damage to the fruit, eg:- bananas, lychee, pineapple, mango and more. They have a proboscis (feeding-tube) which is up to 25mm long. This tube is barbed and strong enough to pierce tough rind. Once pierced, the moth sucks out the juice. Through that piercing, bacteria and fungi can enter, causing the development of rot. The fruit then falls and the smell from that damaged fruit attracts other moths. The damage from the Fruit-piercing Moth can greatly fluctuate but it has been noted that after droughts citrus and tomato crops have been wiped out. In a droughted season, in some countries, these moths will migrate to higher, cooler areas. This helps them escape the influence of natural enemies, eg:- the egg-parasitoid wasp - Telenomus lucullus (Scelioninae); the tachnid fly - Winthemia caledoniae (Tachinidae); the egg-parasitoid wasp - Ooencyrtus papilionis (Encyrtidae) and the ectoparasitoid wasp - Euplectrus maternus (Eulophidae), consequently, these enemies suffer a loss in number - But - when the rains come the host trees (species of Erythina) are flush with new leaves and the moth breeds rapidly and thus we have large outbreaks of the F-p Moth. The female begins to lay up to 750 eggs, during about a 30 day lifespan. Many folk must rue the day - When you fly in - Pierce - Then fly away! References:- Reader's Digest Great Illustrated Dictionary; A Guide To Australian Moths by Paul Zborowski and Ted Edwards; Coffs Harbour Butterfly House; Pacific Pests and Pathogens. Photos have been edited.

Thank you Ornithoptera80 for setting me right on the proper identification of my spotting. Surely helped me to do some better investigation.