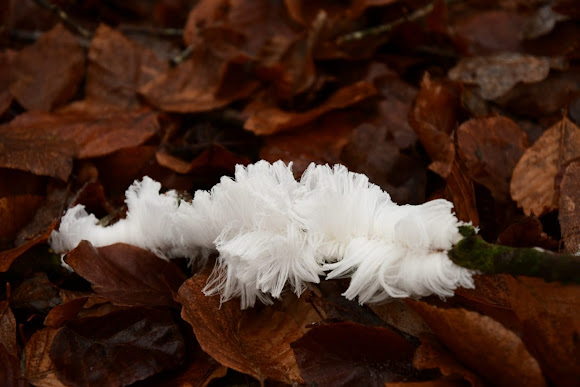 Hair ice is a rare type of ice formation where the presence of a particular fungus in rotting wood produces thin strands of ice which resemble hair or candy floss. The conditions required for the formation of hair ice are extremely specific, hence the relative scarcity of sightings. To form, moist rotting wood from a broadleaf tree is required with the presence of moist air and a temperature slightly below 0 °C. It is generally confined to latitudes between 45°N and 55°N. In 2015 the scientists Hofmann, Mätzler and Preuß determined the exact cause of the hair ice phenomenon, linking its formation to the presence of a specific fungus called Exidiopsis effusa. They discovered that the presence of the fungus led to a process called 'ice segregation'. When water present in the wood freezes it creates a barrier that traps liquid between the ice and the pores of the wood. This creates a suction force which pushes water out of the pores to the edge of the ice surface where it freezes and extends outwards. As this repeats it pushes a thin 'hair' of ice out of the wood which is around 0.01 mm in diameter. It is believed that an inhibitor present in the fungus allows the strands of ice to stabilise allowing the formation of the beautiful phenomena and allows the hair ice to keep its shape often for several hours.

On rotting wood of broadleaf trees.

Spotted on my way to work near a beech tree in an industrial area of Deventer. Picture was taken with my phone and while I brought my camera along the next day to take more pictures, it unfortunately had melted away. The link to Met Office in the reference section also shows in a timelapse video how this hair ice phenomenon is formed. (sources: see reference)

Nice spotting of you

This spotting is very amazing

Stay away from Magnets. I understand they can wipe a memory in seconds :-)

So true, Tukup. Then again sometimes by getting the camera out you'll let the moment pass you by. That's why I cherish mental pictures more, I am just hoping mine don't get lost anytime soon :)

Gotta take that picture when you see it. How many have we lost by waiting until we have our camera :-( That is a beautiful pure white formation. Great explanation of how it is formed. Good eye to see it wasn't just frost. Thanks Jae.

Thank you, my friend!

Thanks Maria dB. Totally worth the slap on the wrist for being late for work :)

How lucky that you took the photo with your phone before it disappeared! Cool spotting.

It truly is an amazing phenomenon, Mark. I remember seeing it a few times as a kid and always thought it was tinsel (Christmas decoration) :)

Amazing stuff.
When this first appeared on PN it gave many a headache for days trying to work out what it was.
I would put it under fungi and use the species name you have.