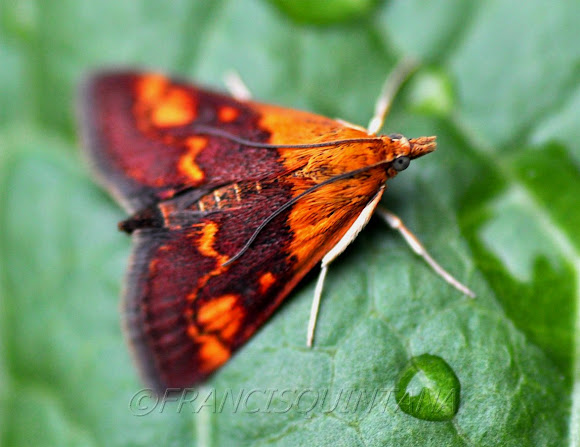 The purplish-brown wings have a span from 10 to 15 millimetres, and a single golden yellow spot on each overwing and underwing. The moth is very similar to the related Pyrausta purpuralis, a slightly larger moth with a larger number of yellow spots. As the name suggests, the mint moth often uses mint as a food plant, though it can also be found on other species such as marjoram. In north-west Europe it can be seen from April until the end of September, and is capable of having two generations in each season.

The caterpillar feeds on various Labiatae, such as Mint (Mentha sp.) including garden cultivars, Cat-mint (Nepeta cataria), Calamint (Clinopodium sp.), Marjoram (Origanum vulgare), Clary (Salvia sp.), Culinary Thyme (Thymus vulgaris) and probably also Wild Thyme (T. polytrichus). The young caterpillar feeds on the under surface of a leaf, later feeding in a web among the flowers of the host plant.

The Crambidae are the grass moth family of Lepidoptera (butterflies and moths). They are quite variable in appearance, the nominal subfamily Crambinae (grass moths) taking up closely folded postures on grass stems where they are inconspicuous, while other subfamilies include brightly coloured and patterned insects which rest in wing-spread attitudes. In many classifications, the Crambidae have been treated as a subfamily of the Pyralidae or snout-moths. The principal difference is a structure in the ears called the praecinctorium, which joins two tympanic membranes in the Crambidae, and is absent from the Pyralidae.

Those colours are amazing!