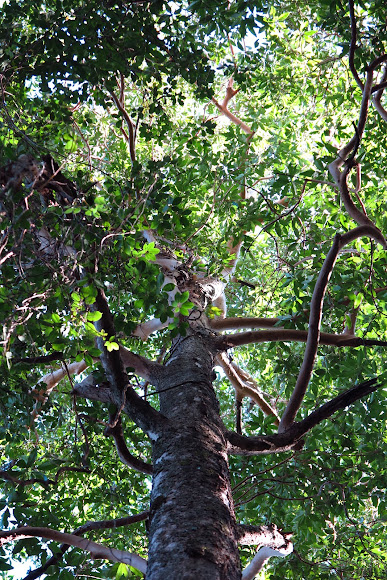 The Pink Bloodwood is one of a number of bloodwood species native to Queensland and New South Wales, and is common in Brisbane and surrounding areas. I'm drawn to the bloodwoods because they have unusual and very distinctive grey bark which is rough, flaky, and irregularly tesselated. This species is a medium to tall tree which can reach 20–30 m (65–100 ft) in height with a 10–20 m (30–65 ft) spread. It's a very hardy tree.

Found in sub-tropical rainforest, on the Pitta Circuit in D'Aguilar National Park. Thick forest canopy of other native tree species such as Strangler Fig, Queensland Red Cedar, and Coachwood to name but a few. At this time of year, any area with a southern aspect in the national park is well-shaded and generally quite moist. This species' natural range is on a narrow belt ranging from Cooktown to north of Newcastle. It grows in open forest, or occasionally lone trees grow in closed forest or on the margins of rainforests That's the case with this spotting.

Thanks, Jae. No, I've never been that far south in WA. Looks like an interesting spot. Did a search of the platanus trees, and some amazing species.

Beautiful spotting, Neil. Loving the bark on this one, reminds me a bit of a platanus tree we have over here. Btw have you ever been to the valley of the giants near Walpole?