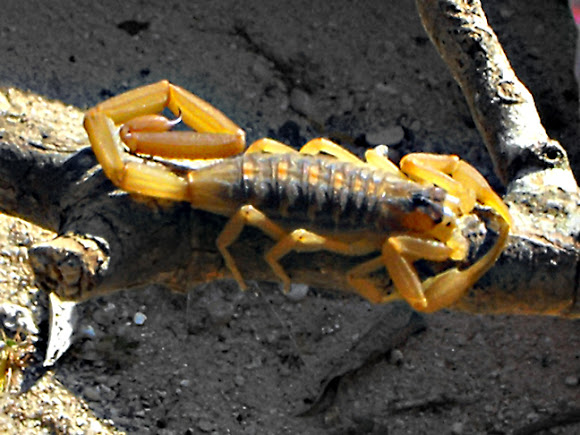 Up to 7 cm in length. A very important clue is the "triangle" on the front of the carapace; long, slender appendages, which are noticeably more elongate in males than in females; two broad stripes down back, with orange bars on each tergite (dorsal plate); hands and fifth metasoma (tail) segment are darker, especially in young and freshly molted specimens; broad stripe on the back of the tail. Venom is a mild neurotoxin, sting is quite painful. Some people might have a severe allergic reaction requiring medical attention. This is the most common scorpion in the USA.

Populations of this scorpion encompass a large geographic range that includes southern Colorado, eastern New Mexico, several of the states in northern Mexico, Texas, western Louisiana, western Arkansas, southern Missouri, Oklahoma, and much of Kansas. Habitat: Rocky glade areas. As per KariMcWest - It also occurs in the southern tier of counties in Nebraska and in a limited area of SW Illinois. It is very opportunistic and found in a wide array of habitats, including Padre Island.

Scorpion found at my favorite eating place. In my area, the best eating places are at old barns. ") You get to hang out with the locals while sitting back and letting the kids run around and play with nature.... okay, so I am the kid running amuck playing with nature. ") But the food is so amazing, nature is the appetizer, even if it is a scorpion.

Thank you, Hemma! And thanks for all of the favorites, guys!

Awesome spot ,next to.

Hello KariMcWest ") Thank you for adding the info. I don't believe that I have seen the other one. I've been stung by many but really never paid much attention to their differences before Project Noah.

Great photo and write-up! It also occurs in the southern tier of counties in Nebraska and in a limited area of SW Illinois. It is very opportunistic and found in a wide array of habitats, including Padre Island. Have you seen the other scorpion in your area, Pseudouroctonus reddelli?

Thank you, Argy Bee. Thank you too, AntonioGinjaGinja for the favorite.

Thank you, Adarsha. Luckily, I already knew the hangout location of this one and a few others. I got a little tickled at my husband. He was brave enough to hold it on the stick for me but then got a bit creeped out and angry. LOL That's love. ") Thank you too, PerilsOfPlastic and LuisStevens, for the favorites as well.